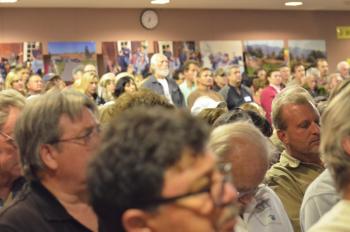 February 6, 2014 (Jamul) Last night, the auditorium at the Jamul Middle School was filled beyond capacity. Residents came to learn the status of a controversy that started over 20 years ago over Jamul Indian Village’s plans to build a casino in this rural community.

Jamulians Against the Casino, a citizens’ group, led yesterday’s meeting and gave a presentation revealing that that three lawsuits have been filed seeking to halt the project.

Supervisor Dianne Jacob (photo, right) told the audience that on January 24, the County of San Diego filed a lawsuit in Superior Court for relief, since Caltrans is giving preferential treatment to the tribe, according to the County. This announcement was met with applause. Jacob also said that the decision to sue Caltrans was taken by the Board of Supervisors in full. The lawsuit’s goal is to invalidate the encroachment permit issued to Caltrans. As she told the crowd, “You cannot separate the construction impacts from the project impacts.” 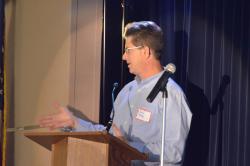 Jamulians Against the Casino (JAC) filed the second suit against Caltrans. It is similar to the one filed by the County. Moreover, Dale Amato (photo, right) with the San Diego Rural Fire District told the crowd that the Board is debating whether to join the lawsuits, and in what capacity. The fire board will vote on it at next month’s meeting on March 5, said Amato, who invited the audience to attend. 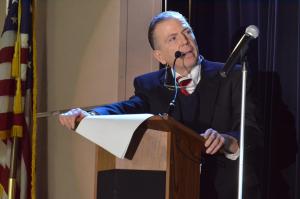 JAC also filed a third suit in federal court in Sacramento. This lawsuit, according to Patrick Webb, contends that since the tribe was not recognized as a tribe in 1932, it cannot be considered a tribe for the purposes of allowing casino gambling. Webb (photo, left) also said that the lawsuit could not be filed until the Lagoon Rancheria V California case was decided in the 9th District court. According to him, that case is very similar and a recent ruling went against the tribe, which was recognized after 1932. In that case, the casino was proposed off of reservation lands.

Read more on this case at these two links:

The primary reason for the project given by the tribe in past interactions, as well as in the tribe’s own Environmental Report are to develop a gaming facility that will turn tribal land into a productive economic use. This would “strengthen tribal government, with a long term, sustainable revenue base able to support and fund a variety of social, governmental, administrative, educational, health and welfare services to improve the long-term welfare and quality of life of the tribal members,” the report has indicated.

We have asked the tribe for comment for this article.  When East County Magazine last talked to Chairman Raymond Hunter, he told ECM that it would also help in giving health insurance to tribal members and improve the quality of life of tribe members.

Chairman Hunter voiced confidence, however, that the tribe will prevail in court. He told the U-T San Diego, “"Jamul Indian Village of California is a federally recognized sovereign nation.” H e added that  "As outlined by the U.S. Department of the Interior's Bureau of Indian Affairs, JIV has the immunities and privileges available to other federally acknowledged Indian tribes by virtue of our government-to-government relationship with the United States of America. JIV entered into a Tribal-State Compact with the State of California on Oct. 5, 1999 and it was approved by the U.S. Department of the Interior on May 5, 2000. Clearly, the law is on our side and we look forward to opening our gaming facility next year and finally being able to provide a greater quality of life for our people."

He also said that the CALTRANS lawsuits, if successful, will force the hauling operations to go through downtown Jamul.

The tribe has made many concessions in deference to community concerns, including funding major improvements along Highway 94 and other roadways.  An original high-rise design has been scaled down to a low-profile building mostly tucked beside an embankment to protect views.   But the JAC remains adamant that it will oppose any and all casino plans. 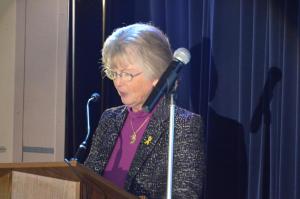 It remains to be seen which side will prevail in court, though the court of public opinion has clearly swung toward opponents if this meeting is indicative of the community at large.

A key argument made by casino opponents has been fear that casino traffic would lead to more serious accidents on State Route 94.  Of note, when Supervisor Jacob asked how many people have had accidents on highway 94, almost every hand in the overflow crowd went up. When she asked how many were opposed to the casino, against almost every hand went up.

Supervisor Jacob then asked if anybody was for the casino.  Only one hand went up.