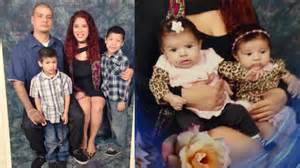 Update March 18, 2014:  All four children have been found safe at the U.S.-Mexico border by Border Patrol agents. The parents remain at large and a warrant has been issued for their arrest. Details below in our earlier story.

March 15, 2014 (Los Angeles) – The California Highway Patrol has issued a statewide Amber Alert for four children abducted in Los Angeles today.  The suspects may be driving a dark-colored Chrysler PT cruiser with paper plates and a missing hubcab. Police believe they may be headed for San Diego or Mexico.

The suspects are Enrique Felix, 28, and Rose Chiarez, 28.  They are suspected of abducting their four children:  Enrique, 7, Justin, 5, and twins Veronica and Janeth.