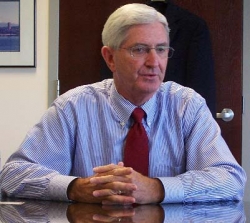 September 9, 2009 (San Diego)--Sheriff William "Bill" Gore was destined for a career in law enforcement. His father and brother were both San Diego police officers; another brother was a deputy Sheriff. He met his wife while both were serving as FBI agents. The couple raised a son (now 25), surviving some harrowing moments along the way. Gore went on to become Assistant Director of the FBI in Washington, D.C., also serving stints in Hawaii, Washington state, Kansas City and San Diego before joining the Sheriff's Department.

As part of our exclusive interview with Sheriff Gore, we asked about his most memorable experiences tracking down criminals--and gained some insights into San Diego’s top law enforcement officer.

Q: Your bio mentions your father, brother, and wife have all been active in law enforcement. What about your mother?

A: My Mom worked for Convair. She was Rosie the Riveter during the war. She quit when Dad was promoted to the Police Department.

Q: What are some of the highlights in your career, along with some of the low points--the scariest moments?

A: It’s not like TV. When you take somebody’s life, it stays with you. That was in 1978. I was in a shoot-out with a bank robber in Seattle. He had a pistol. I had a shotgun…We had a tip that the bank was going to be robbed. I was outside, and my wife who was an FBI agent—actually we were engaged back then--was inside, posing as a teller. All she heard was two shots fired outside. There were some tense moments, but the good guy won.

Q:  What's the toughest part of the job?

A:  Cases with kids involved are the most traumatic. I remember a kidnapping and murder of an eight-year-old, finding the body is a mental image I’ll never forget. Then there are cases where you find a child and you’re returning them to the parents…It’s just a rewarding career.

Q: You've brought down some major criminals, from drug cartels to organized crime rings.  Can you tell us about one of your biggest cases?

A: I helped stop a plane hijacking in 1975. I was in a chase car under the plane, which had landed in Seattle. We came up with a plan to storm the plane…We convinced the hijacker he needed to put a new crew on the plane. We sent in an FBI agent who had flown military planes and thought he could bluff his way through, but we didn’t know the hijacker had been a commercial pilot. He started quizzing our guy about specs of a 727 and realized he was faking…He made them [the agents] strip down. Our man had a gun in the lining of his jacket and he managed to toss it down to us. The hijacker handcuffed our agents in the front, instead of behind their backs, big mistake. He put him up in the pilot’s seat. Our agent dropped a Styrofoam cup or something pre-arranged…

Q: Then what happened?

A:  We raised up the gun on a pole and we were waiting to storm the doors…Sure as hell: boom, boom, boom! Our agent managed to shoot the hijacker and no one on board got hurt. Then we went back in the terminal. There were 400 people there. To get a hero’s welcome was definitely a high for a 29-year-old agent.”

Q: What else stands out as a highlight in your long and illustrious career?

A: The Iranian hostage situation. We were responsible for some of the best intelligence. To be in Washington D.C. and see the parade on Pennsylvania Avenue with all of the freed hostages was pretty heady stuff for a young agent.

Q: How do you relax in your spare time?

A: I enjoy playing golf.

Read our full interview with Sheriff Gore here, including details on how he plans to fulfill his ambitious goal: making San Diego the safety urban county in America.

to view a partial list of crimes committed by FBI agents over 1500 pages long see
http://www.forums.signonsandiego.com/showthread.php?t=59139

to view a partial list of FBI agents arrested for pedophilia see
http://www.dallasnews.com/forums/viewtopic.php?t=3574