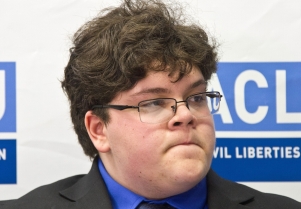 August 4,2016 (Washington D.C.) — The U.S. Supreme Court has voted 5-3 to temporarily prevent a transgender student in Virginia from using the bathroom of his choice, until the high court decides whether to hear the case.

The case was filed by Gavin Grimm, a 17-year-old born female but who identifies as male. He reportedly has a deep voice, facial hair and a state ID identifying him as male. Grimm’s doctor diagnosed him with gender dysphoria and recommended he be treated as a boy. The school allowed Grimm to use the boys’ bathroom initially but after parents complained, the district adopted a policy requiring him to use the girls’ bathroom or a private bath in the nurse’s office.

The ACLU aided Grimm in filing suit, claiming the Gloucester County School District’s action violated Title IX, a federal civil rights program that prohibits discrimination based on sex federally-funded education programs. A district court ruled against Grimm, but an appeals court ruled in his favor, urging the trial court to respect guidelines of the Obama administration. The trial court relented and issued an injunction blocking the district’s policy and allowing Grimm to use the boy’s bathroom.

The school board filed an emergency appeal to Chief Justice Roberts at the Supreme Court.

The Obama administration’s Justice Department submitted a friend-of-the-court brief taking Grimm’s side.  It reads, “Where a school provides separate restrooms for boys and girls, barring a student from the restrooms that correspond to his or her gender identity because the student is transgender constitutes unlawful sex discrimination under Title IX.”

Nearly two dozen states have sued the Obama administration, objecting to transgender students using bathrooms based on their gender identity.

With the Supreme Court in recess until October, justices voted 5-3 to temporarily block Grimm from using the boy’s bathroom until the Court decides whether to hear the full case.  Justice Stephen Breyer joined the court’s three conservative justices in issuing the stay.  The court’s three liberal justices, Elena Kagan, Ruth Bader Ginsburg and Sonia Sotomayor, dissented.

A statement issued by the school board reads, “The Board continues to believe that its resolution of this complex matter fully considered the interests of all students and parents in the Gloucester County school system.”

But ACLU senior staff attorney Joshua Block issued a statement which concludes,”We are disappointed that the court has issued a stay and that Gavin will have to begin another school year isolated from his peers and stigmatized by the Gloucester County school board just because he's a boy who is transgender. We remain hopeful that Gavin will ultimately prevail."