Many people, including those in other parts of East County, were in attendance. 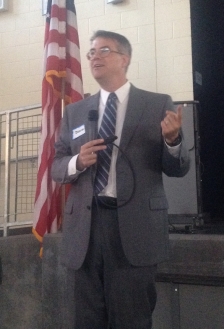 Julie Monaghan of the Institute for Local Government (ILS), a nonprofit of the League of California Cities, facilitated the event. She explained how the workshop would be held to inform people about the district election process, the issue of the California Voting Rights Act (CVRA), the short-term and long-term processes, to answer any questions the public had, and get suggestions about how to reach out to more people of El Cajon so that others not in attendance could have a voice and get informed.

Doug Johnson, president of the National Demographics Corporation (NDC), presented a PowerPoint. He explained that El Cajon currently uses “at-large voting” where all of the people vote for who will be on the city council seats. No matter if the public votes to change the system to district elections, or not, they will still vote on the City Council every two years. When the city is divided into districts, the voters who live in that district get to vote for only one councilmember who represents them.

For background on the CVRA, Governor Gray Davis signed it into law in 2002. It aims to help protected classes, including “Latinos, Asian Americans, African Americans, and Native Americans.” The goal of the CVRA is to protect the voting rights of protective classes who were previously unable to elect the candidates they support to elected bodies.

The Federal Voting Rights Act of 1965 includes a set of questions to see if a city violates the Act. Under the Federal Voting Rights Act, the protective classes can sue if the at-large elections prevent them from voting for their preferred candidate. The CVRA got rid of the questions: 1) Can a protected class constitute as the majority of the district 2) Do the “totality of circumstances” indicate that race is a factor in the elections? The Federal law set four difficult criteria the plaintiffs had to look at to see if a violation occurred. The CVRA makes it easier for plaintiffs to force a jurisdiction to change to by-district elections. Johnson explained, “[The NDC is] looking to try to figure out how people voted in their neighborhood” and then come up with statistics.

This November, if the voters vote to approve the district election, there will be a process of hearings as well as other steps including eventual adoption for the 2018 and 2020 elections. The mayor will continue to be elected citywide. There will be extensive outreach and public input on how the districts should be drawn. If they vote no, the city may be vulnerable to a potential lawsuit, and no agency has prevailed in a lawsuit over the CVRA.

In Johnson’s opinion, “it’s much easier to run for the district” when districts are smaller, because people don’t have to knock on so many doors for their campaign and it’s “more of a neighborhood feeling.” Another positive note is that “No one can bring the CVRA against you.” However, a problem with the district could be that a councilmember may disagree with what a voter in their district may be telling them.

Someone asked Johnson the minimum number of people it takes to make a district. He replied, “It depends how many people are in the city.” The population count is based on the 2010 census. Every 10 years, the population/census changes. As of 2010, there are 102,000 people in El Cajon. So with four districts, each would have around 25,000 people.The mayor will still be elected by the entire city.

A lady wanted to know what happens if no one wants to represent a district if the district election gets approved. Johnson told her, “It’s treated just like any other vacancy.” The City Council can take applications [to appoint someone] or hold a special election, but the person running must be living in that district.”

An older Iraqi gentleman asked if Iraqis are a protected class and what the current count of Iraqis is in El Cajon. Johnson told him Iraqis aren’t a protected class. There’s no current number for them yet in the census. Johnson also explained later that El Cajon has defined/added Chaldeans and other Middle Easterns to the protected class. City manager, Doug Williford, told ECM after the meeting that the Council decided to classify Iraqis as a protected class because they knew the Iraqis weren’t defined as one under the federal law. Other minorities the city would work to protect include those who are already in the federal law.

Someone else asked if the city boundaries would change for the district election. Johnson answered, “The districts are drawn within the city. The city’s outer boundaries won’t change.”

Another person wanted to know the number of votes it takes to approve the change. Johnson said as long as there’s “one more yes than no” the measure passes; it’s by a simple majority.

If the voters approve the change to the district election, there will be a kickoff meeting with the Council where formal criteria adoption for drawing the lines would be laid out. They would also discuss how long it will take to develop those lines. The community could come forward with maps. There would be public hearings. The Council would then decide on the best map to use to draw the district lines and adopt the final map.

Someone asked if there will be a consultant or a committee that will help with district lines. Johnson said that a consultant would help out, but the final decision would rest on the Council and Mayor.

Typical criteria for district lines include the federal laws of equal population and no racial gerrymandering. Neighborhoods/community interest would also be taken into consideration. Neighborhoods are defined by what the community says a neighborhood is. A neighborhood could be school attendance area, city borders, natural neighborhood dividing lines, areas around parks etc, common issues or neighborhood activities, or shared demographic concerns (ancestry or race/ethnicity).

A lady asked the difference between ancestry and race/ethnicity. Johnson told her, “Ancestry could be Polish or Iraqi. Race is defined as Latino or black...Arabs are considered ancestry.” There’s no race of Arabs.

After the presentation, Mahvash Hassan of ILS reminded everyone how important outreach is and getting more people involved. Monica Zech, Public information Officer for the City of El Cajon, encouraged everyone to spread the word to everyone they knew. “This is the first of many workshops,” Zech said. More information can be found at: http://www.ci.el-cajon.ca.us/your-government/district-elections. The public can get involved by attending future public workshops, future City Council meetings, voting on the ballot initiative in November, asking questions, spreading the word, visiting the city’s website, and signing up for the city email distribution list for future communication on district elections.

The public can contact Williford or his assistant, Brett Channing, at (619) 441-1716. Channing can also be reached by email at: bchanning@cityofelcajon.us.

Hassan asked the public for suggestions on who else to reach out to, and how to do more outreach. People suggested Concerts in the Park, Facebook and creating a Facebook page, mailers to everyone, add to the recreation book, city newsletter, neighborhood watch program, Grossmont-Cuyamaca school district, and Grossmont Union High School District.

An Iraqi man wanted to tell Zech to include Iraqi Muslims since not all Iraqis are Chaldean. Zech assured him she would send out emails to them for their input.