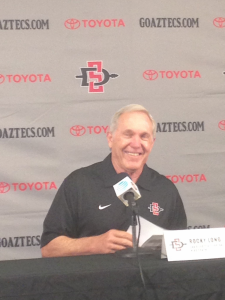 Long started off the conference with some depressing news:  seven players will not be available when practice starts on Monday due to injury.  He hopes they'll be back during the seaon.

Some position changes were also announced because of the injuries.  Daniel Brunskill will be a tackle and Dakota Turner will be a fullback.  Long says he's confident with Brunskill at tackle because of his high school tackle experience.

Quarterback Christian Chapman will be starting full time now after a few starts last season.  Long says he is confident in his new quarterback (although he is "underproven") and thinks he can handle the workload.

The Aztecs had a miserable game against Cal last season, but Long says there is no concern.  However, there is oome concern about the Aztecs' first opponent, New Hampshire.  "Just because they're from way back East and we're out here in the West does not mean that they're not a good football team."  He noted that New Hampshire has made the playoffs for 12 consecutive seasons.

On Donnell Pumphrey: "I think DJ is as good as any running back in the country...and that gives him a chance [to win awards].  He's physically tough, sure, and he's also one of the nicest guys I've ever been around."

Long shot down the idea of an undefeated season. "That has never crept into my mind one time.  Hopefully that doesn't creep into our players' minds.  That's a media deal.  It's very, very difficult, no matter how good you are, to win every game.  It's almost impossible."  With all his dismissal of the media, Long did say that not getting a bowl bid was a disappointing season.

A lot of questions were asked about the Aztecs not being ranked in the preseason Top 25 Coaches Poll.  Both Long and senior running back Donnell Pumphrey brushed off the dismissal. "I mean, it's only preseason," Pumphrey said. "we haven't played a game yet."

One weakness that Long noted was the receiving game.  "Our receivers have to get better," he said. "...we have to have more production out of our receivers."

Pumphrey says he never expected to be the recipient of all these accolades and awards.  He says that despite all the achievements, he still sticks with Coach Long's game-by-game mentality.  He was asked about Cal.  "We're not really looking forward to Cal.  We're focused on New Hampshire," he said.