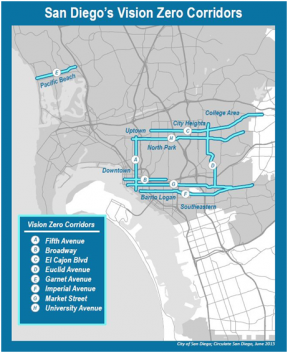 August 8, 2016 (San Diego) - 23-year-old J’Ron Erby, an intern for the San Diego Chargers, was struck while walking early Friday in a hit-and-run crash on the 900 block of Garnet Avenue. He remains in the ICU on a ventilator with severe brain trauma, according to a GoFundMe page set up to help cover his recovery costs.

Two of his friends, including Kendrick Hester, a nephew of a former East County Magazine intern, were also struck but fortunately escaped serious injury.

“This terrible collision is a reminder of how important it is for our region’s leaders to commit to Vision Zero, a campaign to make our streets safe from serious injuries and deaths,”a press release issued by Circulate San Diego today states.

\Garnet Avenue is one of the eight most dangerous corridors in the City of San Diego, as identified by research from Circulate San Diego in our groundbreaking Vision Zero report: http://www.circulatesd.org/visionzerosd.

As reported by the Union Tribune, San Diego police Officer Robert Heims described the driver as having swerved into a wrong-way lane about 1 a.m. in order to pass slower vehicles.

Circulate San Diego and a diverse coalition of 20 organizations have been promoting an initiative for the last two years called Vision Zero that has the goal to end traffic deaths and serious injuries throughout San Diego.

The concept behind Vision Zero is to reach zero traffic deaths through safer street design, education, and enforcement. The program has been successful in other U.S. and European cities.

San Diego's City Council adopted a Vision Zero resolution last October to support the goal of zero traffic deaths in San Diego by 2025. Since then, Circulate San Diego has worked with Mayor Faulconer's office and City staff to form a Vision Zero Task Force and create a one-year implementation strategy.

According to Jim Stone, Executive Director for Circulate San Diego, “Traffic injuries are preventable. Our streets need to be designed with safety in mind. We must also focus efforts on educating drivers and enforcing our traffic laws to prevent serious injuries."