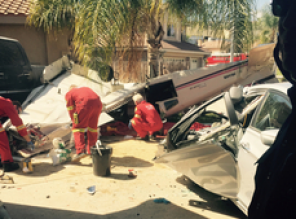 At least twice in recent years, planes from Gillespie have crashed into adjacent neighborhoods, including a fatal crash into a Santee home in 2015 that killed a flight school pilot and student.

“I am hoping this will provide some relief,” says Sue Strom, founder of Advocates for Safe Airport Policy, or ASAP.

Strom indicates that a staffer for Supervisor Dianne Jacob’s office has indicated the change will take effect on September 15th and that Jacob is ”very excited about this.”

A similar request to the FAA a decade ago was reportedly denied.

I think this article is full of glaring inaccuracies; There are only two or three active members of the group mentioned in the article. These two or three are responsible for 95% of ALL of the noise complaints received by Gillespie Field representatives... Does the reporter know that Strom moved? Does she know that she complains about Lindbergh field now that she lives near it? The raising of the pattern altitude may actual increase the noise, not decrease it. The mention of the aircraft accidents is totally unrelated to pattern altitude. Trying to link them is irresponsible. And perhaps actionable. How is the reporter connected to Strom? Did the reporter even bother to speak to any pilots, pilots organization or flight schools to corroborate her reporting? Fairly one-sided since there are better than 1000 pilots she could speak too... How about the people with businesses at the Airport? The Cafe owners or patrons that frequent the Gillespie Cafe? Anyone? Anyone? Is this thing on? No mention of the fact that Strom and her group have tried to file suit against the flight schools several times? Think there might be a 'not so hidden agenda? Come and talk to someone at American Aviation or Golden State to get a better, fresher, clearer perspective. Talk to people in the neighborhood who LIKE the airport and the vibrancy and economic plenty if provides year, after year, after blessed year. Talk to those of us who moved here because we can see the airport and hear the planes making the community more vibrant and progressive with every flight! Hurrah! Three cheers for Gillespie field and it's job creating, revenue generating greatness. Come down and talk to the patrons on "Flydays" when people come to dance and eat and look at the wonderful airplanes, old and new and talk with real live Pilots and neighbors.. Probably quite a few more positive articles in it for your publication and reporters.
What is deceiving is the minimum. I was raised on Sharon Way, one of the highest streets in Fletcher Hills, adjacent to Hacienda Drive. Sharon Way, according to veloroutes.org is 751 feet above sea level. Hacienda Circle is 661 feet, closer to the flight paths than Sharon Way. That means the minimum flight height used to be only 527 feet above Hacienda Circle. Now it will be 727 feet, a 38% increase! It's a helpful move in the right direction (up!).