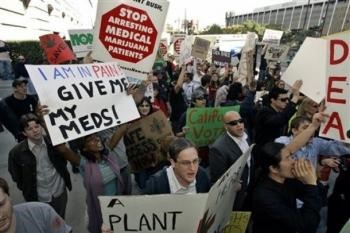 August 11, 2016 (Washington D.C.) — The U.S. Drug Enforcement Agency has turned down requests from governors ease federal restrictions on marijuana.  DEA director Chuck Rosenberg stated, “This decision is based on whether marijuana, as determined by the FDA (Food and Drug Administration) is a safe and effective medicine, and it’s not,” NPR reports.

Marijuana will remain a Schedule I drug under the Controlled Substances Act, along with heroin and LSD.  Other highly addictive substances such as methamphetamine and oxycodone are listed as Schedule II drugs, with fewer restrictions by the federal government.

The federal government has eased restrictions on some research on cannabidiol, an active component of marijuana, and now authorities indicate they will make it easier for more institutions to manufacture marijuana for medical research purposes.

The announcements drew strong reactions from advocates and opponents of medical marijuana.

He added that while opening up new avenues for medical research into marijuana is a positive step, “patients deserve more, and Congress should help them by removing marijuana from the Controlled Substance Act, allowing state programs and medical research to move forward without interference."

“We are pleased with the DEA reaffirming that botanical marijuana is a dangerous drug with a high propensity for abuse.” She cited unspecified “negative impacts of the use of the drug in Colorado and Washington” where recreational marijuana has been legalized and said marijuana is “a hazard to public health and safety.”

Scott Chipman, CALM’’s Southern California chair, urged voters to reject initiatives that would legalize recreational marijuana use and “the institutionalizing of a `big marijuana’ industry in their states.”