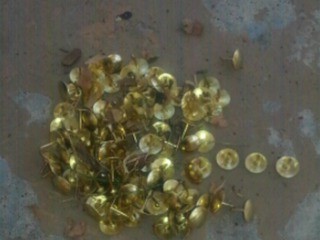 August 11, 2016 (Santee) – 10 News reports that Pami Peterson found dozens of tacks, most pointing up, spread out and hidden in the grass at Mast Park where she brought her three young sons to play.

“I’d like to bring my children here and feel safe, and that I’ve found all of these, I don’t,” said Peterson, who discovered the tacks after they flattened her children’s bicycle tires.

She posted a photo on Facebook (taken after she picked up the tacks) to warn other parents. She also says she notified the City of Santee’s parks and recreation department.