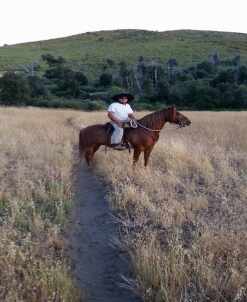 August 13, 2016 (Cuyamaca) – Royal, a horse missing in Rancho Cuyamaca State Park since August 9, was found today by a runner who spotted Royal drinking water at Dyer Spring.  Royal is currently at the veterinarian for treatment of a gash on the leg, but otherwise appears to be in good health.

The horse became startled when its saddle slipped underneath it. Royal ran off along Dyer Springs trail, prompting an extensive search. 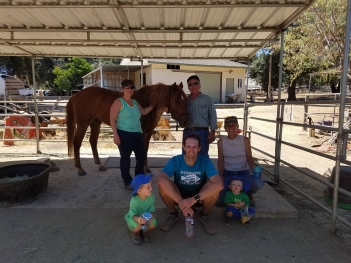 An ad on Craigslist asking for help in the search had this update today:

“ROYAL THE HORSE HAS BEEN FOUND!! Found by a hiker this morning, gash on left leg, and has been transported to a vet. Thank you to ALL who helped!! Equestrians, hikers, dogs, and the whole San Diego community- SPREAD THE WORD.”

Chad Waldhouser, who was participating in the search, provided these details of what transpired after the runner spotted the sorrel horse at the spring.

“The runner held back and stayed his distance as we came up from the south. I dismounted about 50 yards away ground tied my horse and walked up to Royal. He turned away from me and walk up to where my horse was ground tied. At which time he allowed me to come up and put a halter on him. The runner then came up and I told him to let me take a picture of him cuz he was just as much a part of it as anyone else.”

He added, “In our opinion it looks like the horse was hung up in the brush for possibly several days until he was able to work his way out of the saddle and Tack. He was in good health aside a pretty good gash in his right front armpit.” The gas was likely caused by the saddle cinch.  “He even managed to get his halter and headstall off,” Waldhouser said.

He concluded, “Big shout out to everyone who came and looked for him this whole week. It's nice to know the horse community, along with hikers and backcountry runners, pulls together and tries to do what they can.”