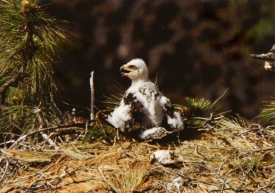 February 12, 2010 (San Diego)--Every day at wind farms across America threatened or endangered species are killed from collisions with blades of the prop wind turbine. This is considered legal because the offending wind farms either hold the "incidental take permit" or were not required to have one because they did not fully disclose environmental impacts of their activities. The U.S. Fish & Wildlife Services requires the procurement of an incidental take permit for any individual or private industry if threatened and endangered species will be killed in a project. This killing is referred to as "take" -- and the perrmit holder has immunity from prosecution.

Currently the USFWS is not protecting America's rare and endangered species, nor is the agency enforcing the law. The number one cause of death for golden eagles in our state is the prop wind turbine. There are dozens of California condors and whooping cranes that have disappeared in recent years. Many(including myself) believe they are dying at winds farms and are not being reported as required by the USFWS. View a video of a fatal encounter between a vulture and a wind turbine here:

An investigation and interrogation of wind farm employees is needed to expose all of this. There are other species as well like the ferruginous rough-Legged hawk that are rapidly heading towards the endangered species list. The use of lie detectors in the process would quickly eliminate the cloak of bird mortality secrecy that permeates the wind industry. After all the incidental take permit requires that "the death or escape of all living wildlife covered by the permit shall be immediately reported to the Service’s office designated in the permit." This is Federal law but where are these reports?

The California condor, whooping crane and many others bird species face a very grim future if the wind industry installs the several hundred thousand prop wind turbines they have planned for America. The whooping crane population is rapid decline and in grave danger because of the increasing wind farms that exist in their migration route. They must fly the prop turbine gauntlet twice every year on their way to and from Texas.

In Southern California, the California condor must have their behavior manipulated with feeding stations to keep them safe from flying off into the blades of prop wind turbine blades in search of food. This too is against Federal law because one of the primary criteria for the issuing of the incidental take permit is that "any authorized take will not appreciably reduce the likelihood of survival and recovery in the wild of any species". Take away the feeding stations from Tejon Ranch and see how fast the condors get slaughtered in the thousands of prop wind turbines that exist their habitat. Sadly because of the Prop wind Turbine, their fate is sealed. Recently two new wind farms have been approved in their habitat. Again, the cumulative impacts of the prop turbine were ignored as experts and planning commissions looked the other way. This silent fraud also violates Federal Law.

Many times to avoid the need for an incidental take permit, wind industry sponsored studies are conducted with a "no look no tell" approach. These incomplete studies lead to the submission of fraudulent Environmental Impact Reports that are presented to Planning commissions. This is exactly what has happened with the wind farms located in California condor habitat.

The truth is that I have yet to read an honest wind industry EIR. For this collusion and fraud there has been no accountability.

To further protect this corruption driven industry there is the 1998 no surprises clause that was written into the federal regulations. This protects the industry from the details and cumulative impacts that were conveniently left out of their fraudulent biological assessments. What has the Fish and Wildlife Service done about their requirement to intervene when unforeseen circumstances are jeopardizing these endangered and threatened species? So far concerning the wind industry, virtually nothing. Federal law states that they must intervene on behalf of the species.

I have come to the conclusion that if local communities want to stop this slaughter of rare and endangered species they will need to take matters into their own hands. It does not look like the USFWS or any state agency will ever uphold the law. As it is now written, the primary condition for the authorized killing of a protected species is that the "take" is "incidental to an otherwise lawful activity". (The laws governing the incidental take permit can be found in the Code of Federal Regulations Title 50 sections 17.22 and 17.32. ) It is time for communities to get organized and make this killing an unlawful activity. New laws need to be passed that ban the "Take" of these protected species by prop wind turbine.

There should also be a very serious consequence for the illegal "Take" of a "Threatened" or "Endangered species. There is plenty of precedence for this because local communities all over the country have limited gun possession, stopped hunting in city limits, stopped the use of center fire ammunition and passed many other similar laws that have to do with the killing of wildlife. By banning "take" with the use of the use of the Prop Wind Turbine, prop wind farms will not be eligible for any incidental take permits.

It is long overdue because birds and bats will never be compatible with the 200 mph tip speed of prop turbine blades. This has been known for over 25 years. America needs to close the book on the dreadful Prop wind turbine industry and move on to the next generation of truly green wind turbines.

The views in this editorial reflect those of its author and do not necessarily reflect the views of East County Magazine. To submit an editorial for consideration, contact editor@eastcountymagazine.org.