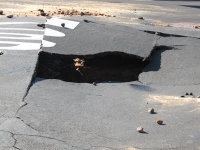 Not all districts have yet seen damage. Katherine Auld Breece, public information officer for Helix Water, said that recently publicized pipe failures were from aging cast iron, not PVC. But the cash-strapped district seeks to curtail future costs of potential expensive repairs.

A lawsuit filed in federal court in Los Angeles back in 2006 accuses JM Eagle and its former parent company, Formosa Plastics Corp., or knowingly supplying substandard polyvinyl chloride (PVC) piping for use in water and sewer lines. That suit was unsealed earlier this week.

The 47 government bodies that have now joined the suit are listed below: