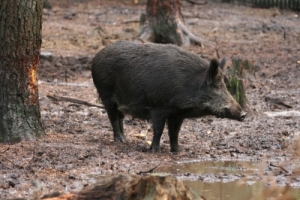 March 31, 2010 (San Diego’s East County) – It's hog heaven in East County. Wild boars and sows have startled horses, hikers and residents in Alpine, Ramona, Poway and other backcountry areas in recent months. A Fish and Game expert estimates there may be as many as 200 to 300 feral hogs rooting their way across East County, the Union-Tribune reported yesterday.

But while bacon-on-the-hoof may provide tempting targets for hunters, the non-native species poses threats to agriculture, livestock and the environment, also raising potential human health and safety issues.

A trophy-sized wild boar, or male pig, averages 200-300 pounds. That’s larger than most mountain lions. A female weighs 100-200 pounds on average. But some have swelled to far bigger proportions.

In 2005, a hunter in Georgia shot and killed an 800 pound pig known as “Hogzilla.” Initially suspected as a hoax, the animal was conclusively shown through testing to be a cross between a wild boar and a domestic pig, through slightly smaller than the 1,000 pounds initially claimed, National Geographic reported. Hogzilla also had fearsome tusks, with one measuring over two feet (28 inches).

While most wild pigs will run to escape danger, some have been known to attack humans, dogs, or even vehicles. In Cherokee County, Texas, a deer hunter died following a feral hog attack. In Waco, Texas, a wild boar “attacked and flipped a utility vehicle on a job site,” the Benton County Daily Record reported. That accident left a worker paralyzed from the chest down. Stories of hunters gored by a charging bore are relatively common. In Hawaii, wild boars have been known to kill or maim hunters’ dogs.

An article titled “Wild hog attacks rare but scary” in the Port Arthur News recounts more chilling tales, including a Florida student chased by a boar on campus, a fisherman charged by a wild pig that entered his home, and a South Carolina man pinned down and mauled by a wild hog. Such tales raise a troubling question: could wild boar attacks occur in San Diego’s East County?

Feral pigs have their roots in Europe. In the early 20th century, wild boars were introduced into the United States for hunting purposes, where they swiftly interbred with free-range domestic pigs. In the wild, feral pigs adopt characteristics of wild swine, such as a bristly coat, tusks, and wily ways of adaptation. They are now found coast to coast in at least 19 states, acording to the 2008 book Wild Pigs in the United States.

Just how East County’s wild pig population originated is a mystery. Some sources suggest the pigs may have migrated here naturally from nearby regions in California, Arizona or Mexico. Others have speculated that the animals may have surreptitiously been imported and released for hunting purposes. Or they may be descendants of domestic pigs that somehow got loose.

The Union-Tribune cites an anonymous source who claimed the pigs were Russian hogs released from pens on the Capitan Grande Reservation in the northwest quadrant of Cleveland National Forest, though no tests have been done to confirm which species of wild pigs now make their homes in East County. The 16,000 acre property is part of the original reservation of the current Barona and Viejas bands of Kumeyaay Indians, now jointly owned by the two tribes.

Robert Scheid, public relations director for Viejas, disputes the claim that local feral pigs came from domestic stock on tribal land. “We can’t find any information to corroborate that allegation,” he told East County Magazine today. “We give no credence to that version over any other version as to how the pig problem began. Ultimately what’s important is not how it began, but how we deal with it. Viejas and Barona have been at the table with Cleveland National Forest and Fish & Game officials, trying to assess the extent of the situation and various options for addressing it. The tribes are very concerned about this situation,” he confirmed, adding that the tribes “want to be part of the solution.”

While some hunting advocates have suggested that wild pigs might prove a benefit for hunters locally, Scheid disagrees. “Any benefits there might be to a hunting season would be far outweighed by the damage these animals could do,” he said. Thus far, sightings on tribal lands have been sporadic and damage minimal, he noted, but said experiences in other areas indicates that a feral pig population can quickly become a problem if not addressed.

Options for controlling feral non-native species in other areas have included hunting, trapping, culling/shooting by government wildlife authorities, and live relocations. All of those options have potential pitfalls, however.

Wild pigs are smart, Sweitzer observed, quickly learning to avoid traps. “They have even been known to play dead when being hunted from helicopters in areas like the Australian outback.”

Much of the undeveloped land in East County is protected county, state or federal parkland, where hunting is prohibited and there is an abundance of brush, foliage, and foraging materials to support a thriving pig population. Without culling on protected lands, the non-native species could thrive in East County’s temperate climate, with only diseases or natural predators such as mountain lions to control a burgeoning pig population. A burgeoning porker population could also lead to growing populations of mountain lions feasting on pigs as prey. Some wild pigs are also on tribal lands, which are legally considered sovereign nations under the control of tribal councils.

According to the California Hog Hunting Guide, feral pigs are now in 56 of California’s 58 counties. In the 1990s, some 34,000 hunters succeeded in bagging about 30,000 wild pigs in our state, making wild boars second only to deer as the top game animal in California, state Fish & Game reports. A special “pig tag” and state hunting license are required to hunt wild boars in California.

A  study by the U.S. Department of Fish & Wildlife (DFW) found that wild pigs uproot acorns, reducing the number of oak tree seedlings. DFW is especially concerned about impacts in fire-ravaged areas that were reseeded. The porkers can also carry diseases that could threaten livestock, pets, wildlife such as endangered bighorn sheep, or even people—as swine flu epidemics indicate.

A Guide to Hunting Wild Pigs in California issued by the state’s Department of Fish & Game concluded that California's “wild pig population has the potential to triple every year” with a typical sow capable of producing three litters of five to six piglets annually—or 15 to 18 new feral pigs each year. Multiply that figure by dozens or perhaps hundreds of mama sows in our region, each able to start bearing offspring in the first year of life, and it’s evident that the feral pig population has the potential to grow hog wild across East County.

I was raised on a farm with a few feral pigs and they used to be quite annoying. They also were quite intelligent contrary to popular belief.

My name is Dr. Linda Owens. I received my doctorate in nutrition and
fitness and truly have a passion for anything health, beauty or well being related.
I have also been avidly interested in pigs and farming for quite a
few years.

Although I am fairly new to this online stuff I have managed to create myself
a blog on the topic of laser hair removal cost
which I am trying to build up as it is a topic I am interested in. I authored
all the articles on my site and am open to feedback as I develop my interests online.
I will be retiring from my practice in a couple of
years and would like to continue bloggin online when I retire.