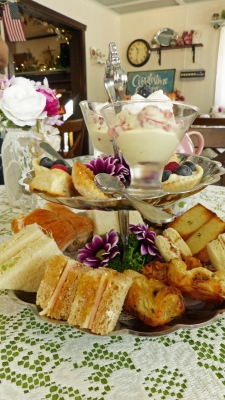 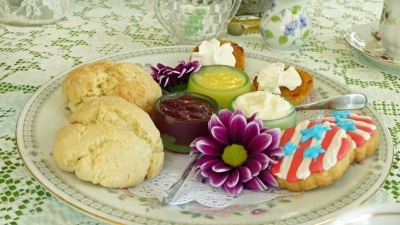 Here for 20 years, the shoppe was acquired and totally refurbished two years ago by Lindsey Goble.  “My daughters and I loved going to teas,” says Goble, who chose a “shabby chic” style with whitewashed paneling  and ceilings evocative of an English country farmhouse.

My daughter and I savored a high tea for two, choosing apple spice tea and chocolate Chai off a very extensive listof teas.  The menu varies seasonally; ours started with butternut squash soup at a table set with floral-patterned china.

Next came an array of tasty finger sandwiches, fresh summer fruits and warm savories. The signature puff pastry with sun-dried tomatoes, oregano and mustard was pure bliss. Other favorites of ours included a salmon croissant, traditional cucumber tea sandwich, and another with ham, cheese and apricot jam. 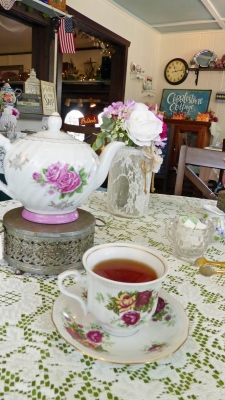 There was also plenty to satisfy one’s sweet tooth, including scones and pastries with Devonshire cream, jam, and lemon curd, a tart with vanilla pudding and fresh berries, and seasonally decorated cookies. The sweetspaired well with a pot of boysenberry tea with rosehips. 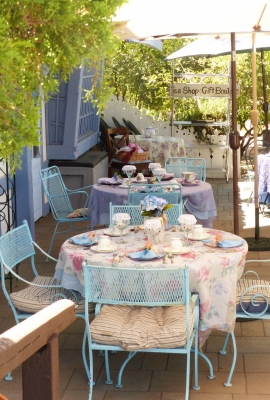 The shoppe itself exudes charm, with both indoor and outdoor garden seating amid a profusion of flowering plants.  The service is friendly, living up to the promise of a sign on a wall which reads, “May all who enter as guests leave as friends.”

Tea time has been a tradition in Britain since the 17th century. By 1700, there were over 500 shoppes serving teas. Afternoon tea is said to have begun in the mid-1800s with the Duchess of Bedford, who felt light-headed between morning and late evening meals, so she began inviting friends to share in afternoon tea and treats.  High tea is actually not a term denoting high society, since the heavier fare served up at high tea actually started as a workingman’s tradition but later became popular in high society as well.

The tradition has spread around the globe. Here in America, where a Revolution resulted in independence from England, tea time is coming of age as new generation is rediscovering the delicious yet simple pleasure of escaping the hustle and bustle to while away time with a relaxing afternoon or high tea. It’s an ideal tradition to share with your daughters or friends. There are even hats you can wear for the occasion! 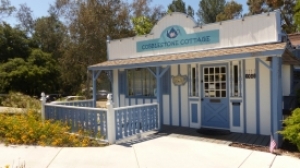 are required for high tea and afternoon tea, all reasonably priced.