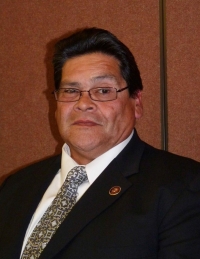 May 19, 2010 (Alpine) – Short of smoke signals, Viejas Vice Chairman Robert “Cita” Welch couldn’t have delivered a stronger message to members of a committee appointed by the Grossmont Union High School Board to recommend names for a planned new high school in Alpine. Despite a “long and proud tradition” of working with the District, Viejas has "increasing concerns" over a proposal to name the school after Ronald Reagan, Welch said.

"Your actions WILL have an impact on our future relationship with the district," he told committee members, then added that former President Reagan “is NOT well-regarded in Indian Country.  At best he didn’t really care too much about Native Americans. At worst—and in some well-documented cases—he showed outright contempt for Native Americans. This should matter to each of you."

Welch asked the committee to keep the Native American perspective in mind and to “SHOW US that this is not a rigged outcome, as so many believe” by being transparent in the naming process, creating opportunities for public input, and developing objective criteria known to the public, as well as ranking names recommended to the GUHSD board which will ultimately vote on a name.

Viejas has been a major financial supporter of district schools. The tribe is also the largest employer in Alpine--and many Viejas children would attend the new high school.

It is rare for tribal leaders to speak publicly on controversial issues; Welch's decision to raise the matter in an open meeting clearly signaled tribal leaders' growing frustration with the Board's insensitivy to Native American sentiments.

Initally, members of the naming committee were kept secret from the public, until the San Diego Union-Tribune forced disclosure with a public records request.  The District also initially sought to keep committee meetings private--until East County Magazine sent an e-mail informing the District that the Ralph M. Brown Act requires that all committees appointed by a public board must hold meetings open to the public.  At tonight's session, Superintendent Robert Collins stated that committee meetings will be public, on advice of counsel.

Miriam Raftery, editor of East County Magazine and founder of the Viejas Wildfire & Emergency Alerts, asked the committee to choose a name that is not offensive to tribal members and to consider a name reflective of the Alpine region’s  Native American heritage.

As an ECM Editor's blog noted last week, the Reagan administration tried to dismantle the Bureau of Indian Affairs and also cut tribal healthcare programs, and increased unemployment on reservations, Raftery informed committee members.  In a widely publicized incident in Russia, Reagan further insulted Native Americans by referring to their lifestyle as “primitive” and suggesting that Indians became wealthy from oil on reservations at a time when 60% of Indians were living in poverty.

Indian Country Today once concluded that Reagan managed to "inflame Indian feeling for most of his eight years in office" and was viewed as "an inveterate Indian fighter" in real life as well as in movies some feel reinforced negative stereotypes of Native Americans.  (View film clip of actor Reagan battling Indians in The Last Outpost.)

Leading Republicans on the committee did not seem inclined to bury the hatchet. No member proposed removing the Reagan name from consideration to avoid offending Indians--and one committee member zinged an arrow in response to the tribal leader's remarks.

Committee member Mark Price, founder and trustee of the Ronald Reagan Presidential Task Force as well as an Alpine School Board member, asked Welch if his comments were intended as a “threat.”

Welch said no, adding that Viejas would respect any decision made in a transparent process. “We took a vote on our tribal council, and our vote was to name the school after the town: Alpine High School,” he noted, clarifying that the tribe was not seeking to have a school named after itself. 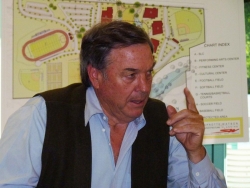 Former Republican Congressman Duncan Hunter, father of the current representative and a member of the naming committee, said he admires Reagan. “He was a historic figure and also a two-term Governor of this state,” Hunter noted, adding that Reagan has ranked high in some popularity polls. He proposed sending a post card to area residents with four potential names: Ronald Reagan High School, Alpine High School, Kumeyaay High School, and Jerry Brown High School after “another two-term California Governor.”

Hunter pushed the committee to choose recommended names for the Board and rejected a suggestion that the public be provided arguments for and against each proposed name. “I don’t think we need a lot of education on this,” he said, noting that Alpine voters overwhelmingly supported Reagan for President twice. 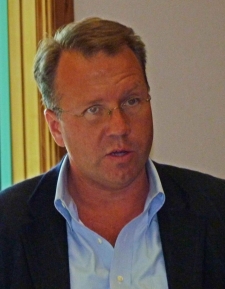 Committee member Ron Nehring, chairman of the California Republican Party and a former GUHSD board member, said he believes the entire district—not just voters within the new school’s boundaries—should be surveyed regarding the new school’s name.

But Hunter countered, “This is our firstborn here in Alpine,” then argued that local residents should have the presumptive right to name the area’s first high school.

Nehring also proposed having an expert craft survey methodology and noted that many questions need to be resolved, such as whether survey cards should be mailed to nonvoters using DMV records or other information. “Anything I’d support should be district-wide and scientific,” he said, noting that he is “more interested in public input than activist input.”

Nehring later said that he would be “fine” with either Ronald Reagan High School or Alpine High School, adding, “I did not ask to be on this committee.”

Superintendent Collins chaired the naming committee meeting. He cautioned that “a survey doesn’t get you the input that we’ve heard from our tribal leaders at Viejas…I appreciate the democratic process, but one thing we have to consider is the concerns of different groups in the community.”

Price offered a motion that the committee support a survey process of every household in Alpine and Blossom Valley that was within the bond measure areas to solicit names for the district’s twelfth high school. The motion passed, with Nehring and Sylvia Sullivan, a Republican Party central committee member, opposed.

When the question of cost was raised, Price offered to pay for the survey himself—a step Collins assured would not be necesary.

Other public testimony included Diana Saenger, a long-time Alpine resident , newspaper journalist and owner of a public relations agency. She noted that name recognition is important but that there are numerous other schools already named after Reagan. Saenger also proposed that three media outlets—two community newspapers and East County Magazine—could conduct a community survey for free and save the cash-strapped district money.

Leona Bennett, who has circulated a petition to allow Alpine to name its high school, said she has received favorable comments from many people in the community.

“I strongly believe communities whose children will be attending and who’s interests are here in Alpine and Blossom Valley should be represented,” said committee member Doug Deane, chair of the East County Chamber of Commerce education committee.

Following the meeting, one concerned citizen voiced criticism that the board could attempt a divide-and-conquer strategy by splitting non-Reagan votes among multiple alternatives.  "If Alpine High is one of the choices, than everyone just needs to vote for it," said the source, who suggested the outcome otherwise could be a reprise of the 2000 Bush/Gore/Nader election in which opponents of George W. Bush split their votes between two candidates, giving Bush the presidency.

Superintendent Collins promised to include the school naming issue on the agenda of a June 8th meeting, then reminded members of the importance of proposing a name that would not divide the Board. “How do I represent this committee,” he asked, “but also bring the Board together so they will all feel good and positive about this committee’s recommendations?” Collins leaves office at the end of June to take another position, however; his replacement has not yet been chosen by the Board.

Welch emphasized that the process will be at least as important as the name ultimately chosen. “The process will affect how the community perceives your credibility, your integrity, and your legacy on this issue,” the tribal leader concluded sagely.

we have to keep the tradition
http://www.praias.com