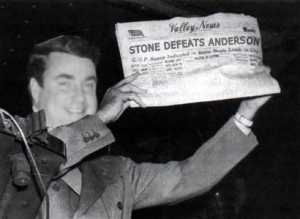 In fact, Anderson leads by a hefty total of 6,810 votes with all precincts in both counties counted--though tens of thousands or more absentee and provisional ballots remain to be tallied.

Stone, a Riverside County Supervisor, captured 15,042 votes in Riverside compared to incumbent Assemblyman Joel Anderson’s meager 6,201 votes. But in San Diego, where Anderson is widely known, the reverse was true, with Anderson garnering a whopping 25,992 to Stone’s 2,461 votes. Another key difference between the two Counties was that Kenneth Dickson placed second, above Anderson, in Riverside returns.

Anderson will face off in November against Democrat Paul Clay, a teacher in Riverside County.