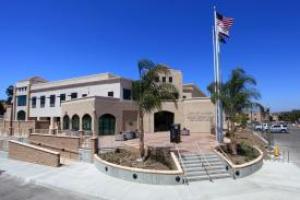 Exhibits will be displayed in the Police Station Community Room.  At the same time, there will be a BBQ fundraiser sponsored by both the Police Officers Association and the Peer Support Team.

Funds will be used to provide various services, including teaching employees healthy ways to manage stress, providing resources to coworkers who may have sick, injured, or ill family members, and staying in touch with injured employees who are out of work for extended periods of time.

“We are grateful to the citizens for the passage of Prop D, that made all this possible,” Mayor Art Madrid said.

In addition to he new police station above, the building also contains approximately 47,000 square feet of secured underground parking, that will hold the City’s entire fleet of City owned vehicles as well as space for employee parking.

The City Council previously voted to sell the old Police Station for mixed use development, however due the economy, the buyer asked to be released from the purchase.

The future of the old building remains undetermined for now. “The economy will dictate to us what we can do with it. In the interim we can possibly lease it, but in the long term we will probably put it on the market,” said Madrid, citing the Councils previous vote.