It’s All About Priorities 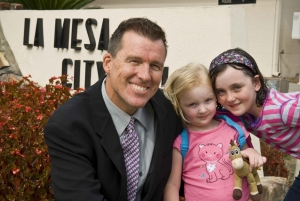 In Part Four of this series on election races in La Mesa, East County Magazine spotlights City Council candidate Patrick Dean. For this series we asked all candidates the same set of questions on local issues, with an open invitation to bring up anything else they would like to discuss at the end of the session.

The youngest of seven children, Dean grew up in the Hollywood Hills and graduated from the renowned Culinary Institute of America. He lived in Manhattan for 20 years, where he owned catering and restaurant businesses before relocating to La Mesa three years ago to be near family in Southern California.

"I've been serving people my whole life in the restaurant industry. Now I want to serve the people of La Mesa," he said. 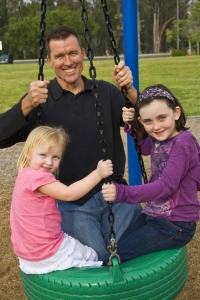 He chose La Mesa, he said, because the schools are top notch; his two daughters began first grade and pre-school this year. “I love La Mesa, in that we have all the benefits of a small town, know people and the Village, yet we’re in the shadow of a big city just a trolley ride away,” he noted.

Trained as a chef, Dean didn’t like the hours and wanted more time to volunteer at his daughter’s school and with Girl Scouts. He is now a waiter at a restaurant in Del Mar.

Earlier this year, Dean and his girlfriend asked the City Council to consider extending the zone in which one may raise urban chickens. They cannot do so where they live, in the City Center across the street from the new Public Safety buildings. The Council put off a vote, deferring to staff to consider in the General Plan update process now under way.

“I’m an urban gardener,” said Dean, who wants to encourage residents to grow food instead of lawns. “We should all try it. We need to get some community gardens going. They not only make you healthier and happier, but help you connect to your neighbor.”

He is also a Precinct Captain for the Democratic Party. “I’ve been interested in politics since I was a teenager, but it took a backseat to my career until George Bush came along,” Dean said.“I would like to find something not in the restaurant business. Politics suits the bill and is really important.” He continued, “There is a taboo about having a political discussion today with someone from a different view point. I can’t keep myself to that. I love to talk and argue with people that have a different opinion, and think that compromises can be worked out.”

Dean explained his motivation for running. “I’m a Democrat and La Mesa is a blue city, and we need some Democrats on the City Council. I’ve got to get it out that Democratic values are my values. I’m endorsed by La Mesa-Foothills Democrat Club and the San Diego County Democratic Party.”

Dean initiated a conversation about a bankruptcy with ECM, saying that he knows the magazine does routine background checks and wanted to discuss some financial trouble.

While in Manhattan, he spent eight years managing and then owning a catering company. The company specialized in catering for a pool of regular customers in the fashion industry, he said, providing high-end, gourmet breakfasts and lunches to extended fashions shoots, often working with the same crew for weeks at a time. Dean said he expanded to open a café. But when his clients’ budgets shrank in the economic downturn, their financial difficulties impacted his business; he had had to declare bankruptcy and is paying off back-taxes on a federal tax lien with the IRS. "In the course of running my business, I tried to expand it and made a bad business decision that I learned a lot from, and had to move on," he said candidly.

PRIORITIES FOR THE CITY’S FUTURE 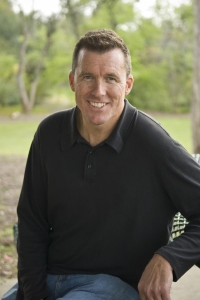 “Police and fire are the most important,” Dean said. He cited a need to make sure that gangs are kept at bay, and praised the Heartland Fire consolidation. “We have to give them the tools they need to make things happen. People who work in public safety are going to have better solutions than I, so we need to talk about it,” he suggested.

He stressed the importance of environmental sustainability, saying, “Long term if we want to become a leader in sustainability… we need to find ways to plan for a post-carbon future. There are hard choices that have to be made.”

He would like to see sustainability put into the General Plan, and public buildings transition to solar energy. Dean spoke at the September 14 City Council meeting, encouraging the Council to take a stand against Proposition 23.

“They should be at the forefront of making enlightened decisions. We would have to look for grants,” he said about the Council, and continued, “Some compromises and some decisions are going to have to be made, with multi-function uses without wiping out the downtown and nice neighborhoods.”

Dean wants the City to cut its water usage and be a role model. “They do a pretty good job, although there are a few lawns I’d like to get rid of and put in a couple of fruit trees,” he said. “We don’t want people to have to make drastic changes to their lifestyle, but we have to find a way to do more with less because we just don’t have it.” He said he would like the city to buy rainwater-harvesting devices in bulk and make them available at that lower price to encourage people to capture rainwater.

He stated that he also wants to “maximize what we can in the budget for park spaces and activities at school. [We need to] keep Recreation Center programs open and keep kids active, because the school budget doesn’t have it.” 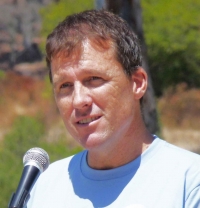 Dean would like to build a park downtown in the area where the old post office came down. “I would like to see it be sustainably designed to reflect forward thinking values. Perhaps a water park for kids,” he said.

Dean drew an analogy to explain his approach to addressing the City’s budget: “It’s a process of dividing up the pie. There are a lot of people that have a lot to say about it, and we have to talk about how to divide it up. A lot of it is pretty much spoken for, but with the little bit of discretionary money compromises have to be made.”

He listed his priorities for those discretionary funds: “I would like to find ways for sustainability, but that can’t happen at the expense of fire fighters. I can’t say that I have any great solutions. Things are going to come up and we’ll have to make hard choices. Programs for kids after school would be high priority after police and fire.”

Dean is against the two-tiered pension system that the City has now established with two out of three employee unions, saying it comes back to “looking at how that pie is divided up.”

He cited a Stanford study that painted a dire economic picture for the state, calling some of the numbers “suspect,” and continued, “I think some of the problems are going to take care of themselves as we come out of it. Those CalPERS numbers are going to look better. I personally don’t think they are so bad that we need to talk about a two-tiered system.”

He elaborated, “I’m not sure it’s a system that works. You create a work environment inside the workplace that’s not going to be cost effective in the long run. Two-tiered system to me doesn’t look like the answer.”

Dean cited the Village as one of the things that sold him on La Mesa, and said the City’s revitalization plan is a step in the right direction.

“I love the family owned businesses, and when you get money that is going to circulate in the local economy that’s the key. That’s one of the biggest issues that the City Council could do, to help small businesses grow and prosper,” he said.

Asked his views on height variances and scale for buildings in or near the village, Dean replied, “I would not consider anything over the eight stories that is now the most we have in La Mesa. I would prefer to not have any variances at all. This should be addressed in the general plan. Let's decide how we want our town to look like ahead of time and stick to it.”

ECM also asked Dean about the Park Station at the Crossroad proposal, which would develop all the land encompassed between Highway 8, Baltimore Drive, University Avenue and Spring Street. The project owners have proposed mixed-use buildings up to eighteen stories, and asked the City to vacate a portion of Nebo Drive and give it to the project, on which the developer would build a park, by which it would then become qualified to receive a “density boost” that would increase the number of apartments they would be permitted to build.

Dean said he was glad to see people working on mixed-use development and would love to see that area developed. But he noted, “They’re getting a lot out of it, so we need to negotiate with them. Vacating the street should be on the table, but there should be a great plan to make the City better.” He believes a mixed used development of some sort on the property could be acceptable if it passes the appropriate review processes.

He emphasized negotiating with the developer. “I think it can’t be the kind of exemption that they’re asking for. I think we can give some exemptions, as long as what we’re getting back gives value to the city. We need to drive a hard bargain,” he said, adding that the site has potential to “revitalize the city near downtown, bring in revenue and bring in people to work and live, and meet our sustainability goal.”

Correction:  An earlier version of this article stated that Dean had a lien against his house. Dean indicates that he has never owned a home but is paying down a federal tax lien for back taxes.  Dean also indicated the lien is $14,000, not $40,000. We regret the misunderstanding.