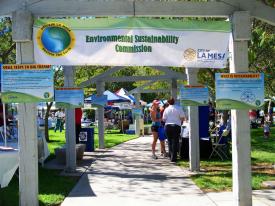 October 11, 2010 (La Mesa) – For each of its three years now, the “Sustain La Mesa” Environmental Festival has doubled in size, in pace with growing public green awareness. This year an estimated 1,500 people attended.

Mayor Art Madrid called it "The third and the very best, which means that all La Mesa residents, especially our youth, are embracing an environmental, sustainable new way of life to protect our health and safety." 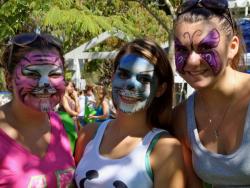 In addition to a comprehensive recycling drop off and light bulb exchange, visitors could pick up information on a wide variety of green topics, including recycling, gray water and water conservation, solar energy, native species and the chance to speak with Master Gardeners. Specialized guest speaker presentations included making your own rain barrel, hydroponic gardening, and green commuting.

There was the opportunity to build a portable solar oven (a design being used in disaster-stricken in Haiti), and the Solar Cooking Club cooked up a picnic feast. The City also presented information on the new Community Garden, the General Plan Update, and the Health and Wellness program. 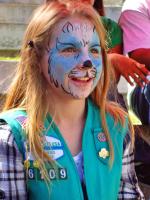 The festival had activities for all ages. There was face painting by the Clown Conspiracy, as well as a magic-rap act on water conservation by Ms. Smarty Plants of the Water Conservation Garden at Cuyamaca College. The City’s Youth Advisory Commission, Helix High School Key Club and local scout troops volunteered at the event.

The Mayor opened the Festival by presenting awards to winners of the “Our Planet, Our Home” grades K-12 poetry and art contest, a cooperative effort of the City of La Mesa, the La Mesa Library, and the La Mesa – Spring Valley School District. More than 225 entries were received. The winning pieces will go on display at the La Mesa Library for one month, starting this week. To view the artwork and poems, see our companion piece here. 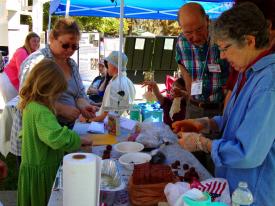 The event was organized by the City's Environmental Sustainability Commission, and underwritten by SDGE, Edco and other sponsors.