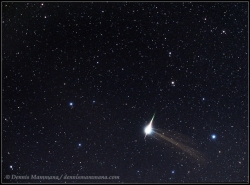 October 13, 2010 (Jamul) – An East County Magazine reader asks, “I want to know who else saw the blue and whitish-orange meteor I saw from my house in Deerhorn Valley in Jamul at approximately 8:50 pm on Monday evening, October 11.”

The reader, who asked that her name not be published, added, “I saw it when it was rather low--it had a head on it and had a pretty thick tail.. .thicker than the meteors you usually see in a meteor shower. A moment later the surrounding horizon on both sides lit up...From my vantage point it looked like it was southeast, maybe in the area of Otay Lakes or Dulzura.”

Dennis Mammana, who pens the “Stargazer” syndicated column, told East County Magazine that the description does sound like a meteor and indicated that such sightings are more common than most people realize.

If you spotted the meteor or have a photograph, please contact editor@eastcountymagazine.org.

October 14, 2010 (San Diego’s East County) – Earlier this week we published an inquiry from a Deerhorn Valley/Jamul reader who believed she saw a large meteor possibly crashing to earth over East County on Monday night, October 10.

Today, we received an e-mail from Erich Wichman, a meteorite hunter and researcher with Meteorites USA and Meteorite Hunting & Collecting Magazine.

“We’ve received one other report of this fireball thus far,” he confirmed. Wichman seeks additional witness in hopes of forming a “search and recovery team to locate specimens of this apparent meteorite fall.”