CHRISTIANS IN IRAQ AMID ESCALATING VIOLENCE 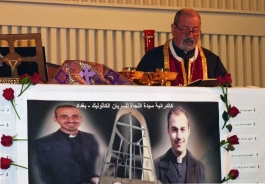 “We will keep our church open ‘til our last drop of blood is shed.” – Father Waseem Petrus, shortly before he was beheaded on the altar of his church in Baghdad on Oct. 31

“Enough bloodshed by the Christians. Our rights have been violated. This is not ony for the Christians in Iraq; this should be the concern of every Christian in the world.” –Vivian Haisha Shabilla, president, San Diego Chapter of the Assyrian Aid Society 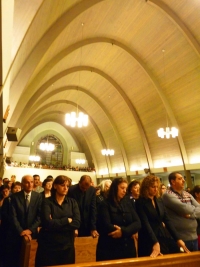 November 7, 2010 (Spring Valley) - Hundreds of mourners filled Santa Sophia’s Catholic church in Spring Valley tonight, where a mass was held in memory of at least 58 Assyrian Christians who died and 75 who were wounded in the October 31st attack by terrorists at an Assyrian church in Iraq. Many here lost family members or friends; their photos stood in front of the church altar, each with a single red rose—a little boy, a woman, men young and old. 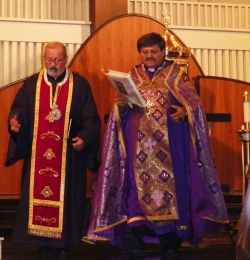 “They were beheaded right on the altar,” Vivian Haisha Shabilla, president of the San Diego Chapter of the Assyrian Aid Society, told me. Shabilla translated portions of the mass, which was conducted in four languages: Aramaic, Arabic, English, and the Syriac dialect. Non-Catholics and even some Muslims attended to show solidarity and concern for the many Iraqis in San Diego's East County now grieving for their lost loved ones.

“May the martyrs enjoy the heaven with our Lord and savior,” said Father Emad Al Sheikh, who celebrates mass at Santa Sophia for his Syriac congregation, Our Lady of Perpetual Help. The Syriacs, along with the Chaldeans, are part of the ancient Assyrian community that has its roots in Mesopotamia. Both sects are Catholic, though differing in Liturgies. There are at least 40,000 Iraqi Christians, mostly Chaldeans, in East County. 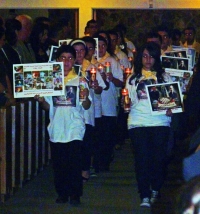 Bishop George Al Morr from Jordan also participated in the mass. Father Al Sheikh told those present that the Bishop met with Father Petrus shortly before he was murdered. “He asked, how are you surviving the situation in Iraq,” Al Morr recalled. “He said `We will keep our church open ‘til our last drop of blood is shed, and that is exactly what happened. He gave his blood and lost his life.” Both young priests were beheaded by the terrorists. 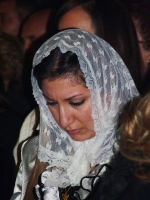 A group with ties to Al Qaeda, calling itself the Islamic State of Iraq, claimed responsibility for the massacre at Our Lady of Salvation, a Syriac church in Baghdad. The group reportedly threatened to begin slaughtering Christians throughout the Middle East after an Egyptian church reportedly refused to release two women who converted to Islam. 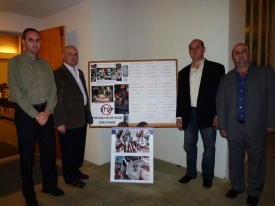 “I had five members of my family that were in the church,” Wameedh Tozy, 31, of El Cajon told East County Magazine. Tozy’s uncle and a cousin’s husband were killed. “My cousin, she is pregnant at four months and she had a bullet in her back. She is still in the hospital; it is very hard, they had to take it from the stomach out through the front,” Tozy said, adding that the baby is in stable condition. His aunt suffered shrapnel wounds and another cousin suffered head injuries that fortunately proved only surface wounds.

Tozy said his relatives told him the terrorists first used guns, and when the bullets ran out, “they were throwing bombshells and grenades….They said `We are going to make you in hell right now, and again when we kill you.” 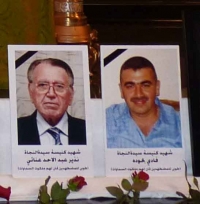 His male cousin covered his head and his sister’s with cloths, so that the terrorist would think they were dead. The ploy worked, enabling them to survive. “But his brother-in-law died in his hands, bleeding, because it was five hours before they could get help,” he said, blaming security forces for “just standing outside and doing nothing” to end the slaughter.

The emotional toll is “devastating,” said Tozy, who said of the terrorists, “They are not human.” 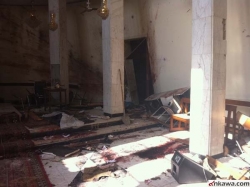 Tozy came to America in 2002 as a refugee and is now a civil engineer. “We have to get the word out, please, to help us,” he implored, adding that many of his relatives in Iraq don’t have the financial resources to leave. “These people are helpless…All they want is to live peacefully and practice Christianity in freedom.”

The same church where the October massacre occurred was previously bombed in 2004. Another of Tozy’s cousins was injured in the earlier bombing and obtained refugee status. “She’s been in Syria for four or five years now, but she hasn’t got papers yet to leave,” Tozy noted. 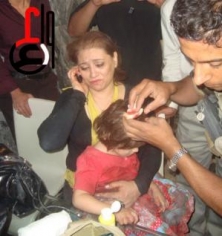 The ordeal has tested his faith , he admitted. An aunt who he describes as “a true believer” refused to leave Iraq. “She is an old lady. She said, `if I don’t stay for the other people here, who will stay?’” he recalled. “It shows you are strong people are…But all of the time we have God; he is the only one who is with us.”

ECM spoke with a young Assyrian woman who was able to escape Iraq, but she is fearful against retaliation against herself or family members and asked that her name not be published. “I was working as a dentist in Mosul,” she said. “I was every day praying to come back safe to my kids after going through car bombs and bombs planted on the street. We were paying what they asked us to pay, which is about three-quarters of our wealth to leave us safe, but it gets worse." 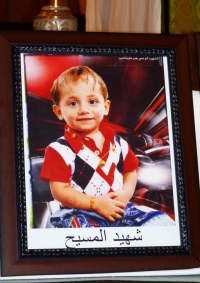 She continued, "When they started demanding us to wear the hijab, I refused to do so and I couldn’t keep my mouth shut. After these incidences I was talking badly about terrorists inside the hospital; it turned out that even your colleagues are spies and have terrorists among them. I felt that my head may be next on the menu, so we left everything behind and came here. We are living poor,” said the young mother, who has returned to school to get her professional license. The process will take years and cost $300,000 in student loans. But she said, “It is worth it for the sake of my children.” 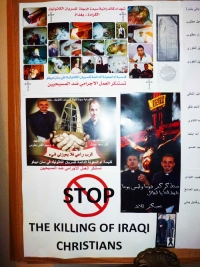 A campaign on Facebook to organize worldwide demonstrations Monday to demand protections for Assyrians and other Christians in the Middle East has drawn over 45,000 signatures. The page is titled The March Against the Ethnic Cleansing of Iraq’s Indigenous Christians.

According to the website www.ChristiansforIraq.com, Assyriains of Iraq have suffered genocide since June 25, 2004, date of the first church bombing. Since then, 66 churches have been bombed and thousands have ben murdered. Nearly 40% of the refugees in Syria and Jordan fleeing Iraq are Assyrian, though Assyrians comprise just 6% of Iraq’s population.

On Monday, November 8, from 12 p.m. to 4 p.m., a demonstration will be held outside the federal building at 880 Front Street (corner of Front and Broadway) in downtown San Diego. Other demonstrations are planned in major cities in the U.S. and worldwide, including London, Cairo, Sydney, Los Angeles, San Jose, Modesto, Detroit, Windsor, Chicago, Las Vegas, Phoenix, Hartford, Toronto, and locations TBA in in Holland, Germany and Sweden.

Organizers are asking that a United Nations or Iraqi commission be established to investigate the church massacre and recommend actions to protect Assyrians. They also call for the U.S. Congress and State Department to address Assyrian safety issues and for creation of an autonomous Assyrian state with its own police force to protect Assyrians. 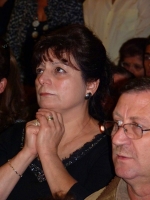 “If the United States continues to do nothing to help preserve Iraq’s heterogenous population, and specifically Iraq’s ancient Assyrian population,” the Assyrian American National Council website states, “then the Iraq war will have been a direct cause of an extinction of an entire population from their indigenous lands.” The Council calls on Americans to contact their Congressional representatives and urge that the U.S. government work with Iraqi officials to help secure Iraq’s Assyrians throughout Iraq and protect the minority. An online petition has been established at www.rallycongress.com/aancoalition/3648/go

At tonight’s service, prayers were offered up for the souls of the murdered priests and the other people who died, as well as for the recovery of those who were injured, for their families to find comfort and hope amid devastation, and for the protection of priests at other churches. Truth TV (http://truthsat.TV, in Arabic) has agreed to donate $10,000 to help Our Lady of Salvation Church rebuild, ECM learned this evening from a station representative who was present.

“Enough bloodshed by the Christians. Our rights have been violated,” concluded Shabilla, who hopes to see a large turnout at Monday’s rally to protest the massacre—and ask the U.S. and Iraqi governments to take action to protect the Assyrian people. “This is not only for the Christians in Iraq; this should be the concern of every Christian in the world.” 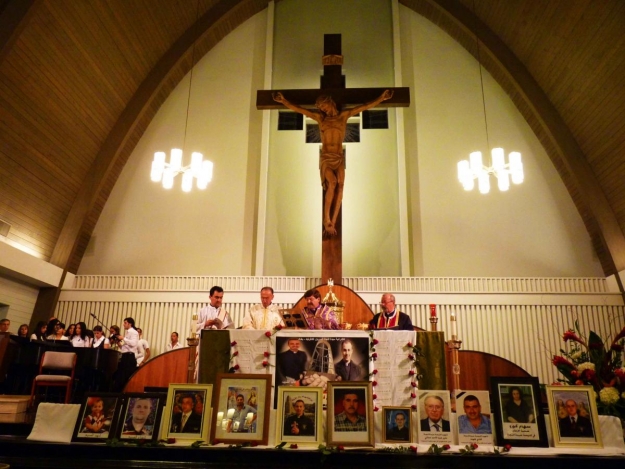 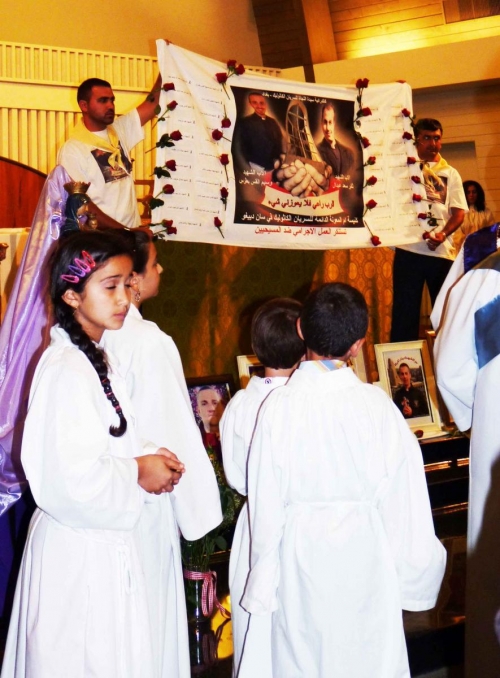