Lions are attracted by deer and other prey.  Learn how to plant deer-proof landscaping and protect yourself when living or hiking in lion territory.

Carissa Fields, a nanny, was supervising several toddlers in a park playground next  to the school. She was shocked to learn that a lion was spotted nearby. “We wouldn’t be here if we’d known that,” she said. “I didn’t know that mountain lions were this far out into civilization,” added Fields, a resident of Jamul.

A woman jogger was running in the same park, right past brushy areas at the base of a mountain. She had heard about the lion, but went for a run anyhow. Asked if she was concerned, she replied, “No.”

Deanna Stevens, who notified Fish & Game officials last week about attacks on animals on Steele Canyon Road that appeared to be the result of a mountain lion, had this to say about today’s sighting. “I don't think there should be mass panic here in the neighborhood, but I do think some common sense should be used. I have small children (and some big ones) I don't let the kids go outside to play or even walk to the car alone. We've made some other small changes. When we come home after dark, we make noise walking in to the house. “

harm coming to the big cat, but added, “I do think if the mountain lion becomes aggressive towards people or appears to be unafraid to be near people that I might rethink my opinion.” She also voiced concern that the predator may be becoming dependent on pets and domesticated livestock as prey instead of wild game.

Gary McCoy, an ornithologist and taxidermist who works at Cottonwood Golf just blocks from the latest lion sighting said he saw a lion cub last year. Other lion activity has occurred in the area recently, he said. “About two months ago , one killed a deer right on a lady’s front yard. Fish & Game came out; they said it was a big male, probably the same one.” Today’s lion was spotted on a hill above the school around 10 a.m., he said.

McCoy speculated that calving season on nearby Ivanhoe Ranch could be an attraction for the lion, though he was aware of no calves killed or attacked recently. “A lion can cover 50 miles every two days, so you can almost gauge when they will be back, every 72 hours or so,” he said. McCoy voiced concern over the lions, noting several recent attacks on people in Southern California. “They should shoot ‘em all,” he said.

Shooting a mountain lion in California is illegal and carries a hefty fine. Hunting lions in California has been illegal since 1990, when a ballot measure passed to protect them. A Fallbrook avocado ranch managerr who claimed he shot a treed lion in self defense faces criminal charges.

Lion attacks on humans, though rare, have occurred with increasing frequency. Twenty-two of 25 reported attacks in California since the 1800s occurred in the last quarter century. In Rancho Cuyamaca State Park, which has had several reported cases of attacks and stalkings, a woman hiker was killed in 1994. http://tripatlas.com/Cuyamaca_Rancho_State_Park . Lions are solitary animals that generally stay out of sight. Most attacks occur from behind, catching people walking, hiking, or even bicycling unaware.

Lion tracks resemble tracks of a large dog. Both have an “M” shaped pad, however the lion tracks lack toenail prints (see photos).

Don't Feed Wildlife: By feeding deer, raccoons or other wildlife in your yard, you will inadvertently attract mountain lions, which prey upon them. 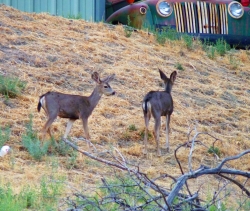 Deer Proof Your Landscape: Avoid using plants that deer prefer to eat. If your landscaping attracts deer, mountain lions may be close by. The California Department of Fish and Game has a brochure entitled Gardening To Discourage Deer Damage, available at most Department offices.

Install Outdoor Lighting: Keep the perimeter of your house well lit at night, especially along walkways, to keep lions visible.

Keep Pets Secure: Roaming pets are easy prey for hungry mountain lions. Either bring pets inside or keep them in a kennel with a secure top. Don't feed pets outside; this can attract other mountain lion prey.

Keep Livestock Secure: Where practical, place livestock in enclosed sheds and barns at night, and be sure to secure all outbuildings

Keep Children Safe: Keep a close watch on children whenever they play outdoors. Make sure children are inside between dusk and dawn. Teach your children what to do if they encounter a lion

WHAT SHOULD YOU DO IF YOU ENCOUNTER A LION?


Do Not Hike Alone: Go in groups, with adults supervising children.

Keep Children Close To You: Observations of captured wild mountain lions reveal that the animals seem especially drawn to children. Keep children within your sight at all times.

Do Not Approach a Lion: Most mountain lions will try to avoid a confrontation. Give them a way to escape

Do Not Run From a Lion: Running may stimulate a mountain lions instinct to chase. Instead, stand and face the animal. Make eye contact. If you have small children with you, pick them up if possible so they don't panic and run. Although it may be awkward, pick them up without bending over or turning away from the mountain lion.

Do Not Crouch Down or Bend Over: Research has surmised that a human standing up is just not the right shape for a cat's prey. On the other hand, a person squatting or bending over looks a lot like a four-legged prey animal. If you're in mountain lion country, avoid squatting, crouching or bending over, even when picking up children.

Do All You Can To Appear Larger: Raise you arms. Open your jacket if you are wearing one. Again, pick up small children. Throw stones, branches, or whatever you can reach without crouching or turning your back. The idea is to convince the mountain lion that you’re not prey and that you may be a danger to it.

Fight Back if Attacked: A hiker in Southern California used a rock to fend off a mountain lion that was attacking his son. Others have fought back successfully with sticks, caps, jackets, garden tools and their bare hands. Since a mountain lion usually tries to bite the head or neck, try to remain standing and face the attacking animal. Peppper spray has also been effective in foiling some lion attacks.

REPORT ALL ENCOUNTERS OR ATTACKS: Contact the Department of Fish and Game or the local Sheriff's office.