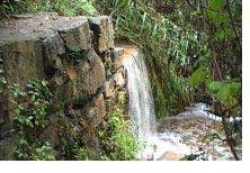 November 11, 2010 (Lakeside) – This  video adventure  reveals an exciting discovery in my search for East County history. Reading about the history of the Lakeside Inn, I discovered that the innkeepers needed a water source, so a dam was built on Los Coches Creek back during pioneering days in the 1800s. An old black and white photograph of the dam captured my imagination.

I’d assumed that when the flood channel was built in the 1880s, the dam may have been destroyed. So I was excited when Pam Wilmers, a friend, told me a story of riding her horse to a waterfall back in the 1970's. I just had to take a look.

As I hiked up Los Coches Creek and seemingly back into time, I heard the sound of water flowing over the spillway in the distance.  It was hard to contain my excitement. At first I thought maybe it was the sound of water gushing over the large boulders in the creek. Much to my amazement, however, I discovered it was the Los Coches Creek Dam--exactly how it looked in that vintage photo.

I almost couldn’t believe my eyes. The waterfall, it turns out, was the spillway of the dam!There it was, a sentinel from the last century, just waiting to be rediscovered.  It had been raining all week, so there was no shortage of water flowing over the spillway in a fourteen-foot-high cascade.

As this footage reveals, the appearance of the forgotten dam has not changed; it’s still there and is in excellent condition—130 years later. What a beautiful site!

I hope one day it will become a recognized California landmark.  View this video adventure.

Hi Billy,
My boyfriend & I have just started hiking in the local area.
We recently moved to Lakeside.
We found the Cottonwood Creek waterfalls and just did Sletzer Park this weekend.
2 questions I hope you can answer:

1) Can you tell me how to get to the Los Coches Creek Dam?

2) Up at the summit at Sletzer Park, I found a conch or seashell embedded in the hillside. A tiny piece was showing and I had to dig it out. Can you tell me about when that high area would have been under water?

Thanks and I am happy to become a member.
Teri Byrne

Hi Teri thank you for the interest. Unfortunately at this time I cannot disclose the location of the Los Coches Creek Dam, maybe soon in the future it will become public.
I found this for you on question # 2-http://en.wikipedia.org/wiki/Panthalassa
A good hike is the El Capitan Mountain Preserve. Staging area is on Wild Cat Canyon Rd.
Thanks Again.