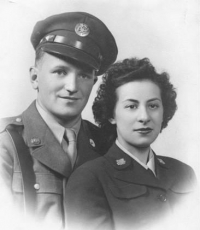 He is survived by his wife, Gladys, his son, Greg Palast, an investigative journalist who won the George Orwell “Courage in Journalism Award” for his reporting with the BBC, and his daughter, Geri Palast, who served as Under Secretary of Labor during President Bill Clinton’s administration.

As an eight-year-old boy in Chicago, Gil Palast once asked his older brother why people were outside in the cold snow in a long line. After learning that it was a bread line for the hungry, young Palast took his mother’s diamond brooch and gave it to a man in line. “The important thing is, after my father gave away the jewels, no one in his family chastised him,” his son, Greg Palast, recalled in a memorial tribute titled “The Family Jewels.” Gil Palast served in the U.S. Army during World War II in the Pacific theater of operations. His son, Greg, described him as “a patriot…To him, America stood for Franklin D. Roosevelt and the Four Freedoms. My father’s army had liberated Hitler’s concentration camps and later protected Martin Luther King’s marchers on the road to Birmingham. His America put its strong arm around the world’s shoulder as protector.”

But on March 8, 1965, when U.S. Marines landed at Danang, Vietnam, Gil Palast believed that the Army he served in, which had once freed the oppressed, had now become the oppressors of impoverished people n Asia. So he gave his military medals to his son.

“He wanted me to lose them, to throw them away, anything,” Greg Palast recalled.

Gil Palast resided on Mission Gorge Road in San Diego's East County, along with his wife of many years, Gladys. The couple loved to dance, winning a medal for tango in their 70s.

Their activism continued late in life. Not long ago, Gil Palast, using a walker, and Gladys, hooked up to an oxygen canister, made their way to a local grocery store to join a union picket line.

On Saturday, November 6, Gladys Palast celebrated her 89th birthday. Her husband’s last words to her were “Happy birthday,” Greg Palast recalled. The next day, he died.

Family has asked that in lieu of flowers, donations be made to the nonprofit Palast Investigative Fund to provide a fellowship for a young journalist. Donations may be made online at http://www.gregpalast.com/store/?gilpalastfund, or by sending a check payable to: "Sustainable Markets Foundation/PIF" and mailed to: Palast Investigative Fund, Greg Palast, PO Box 90, Greenport NY 11944. This address may also be used to send condolence cards.