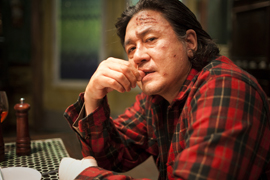 March 18, 2011 (San Diego) – I want to make one thing plain: I Saw the Devil is not entertainment. It is sickening, repellent, unrelentingly violent, depraved, and twisted. That last sentence makes it sound like it was a thoroughly unpleasant experience. Instead, it is a great film for exactly those reasons. It is definitely not for everyone but if you’re looking for a revenge film done right, and you don’t mind subtitles, then here’s a film for you.

Kim Jee-woon, director of I Saw the Devil, has an ability to traverse many different genres well. His 2003 film, A Tale of Two Sisters (remade two years ago here in the states as The Uninvited), is one of the few horror movies with the distinction of genuinely frightening me.

On the other end of the spectrum is The Good, the Bad, the Weird. That film was a funny, freewheeling, hyperkinetic, and artistically and comically violent homage to 1960s Italian spaghetti westerns (New York Post film critic V.A. Musetto referred to it as a “noodle western”).

Then there’s I Saw the Devil. The movie opens with an evil, repugnant serial killer Kyung-Chul (Choi Min-sik) murdering secret agent Kim Soo-hyeon’s (Lee Byung-hun, who played the “Bad” in The Good, the Bad, the Weird) fiancée.  I won’t reveal the revenge because doing so would ruin the unpredictability of the picture.

It is that last quality with which I Saw the Devil succeeds and where many modern American revenge movies not directed by Quentin Tarantino fail. Movies like Edge of Darkness have one goal: having the main character find the culprits and off them one by one, often in gruesome ways. Other than containing boilerplate characters and plots, these movies often go for the payoffs without working on the set-ups. It’s like a comedy delivering only punch lines.

Kim Jee-woon saves the payoff for the second to last shot. The approximately two hours and twenty minutes preceding it is all unpredictable set-up. The violence against the women is tough to take, despite most of it occurring off camera. Interestingly, it is the violence committed by Kim Soo-hyeon against Kyung-Chul that is most graphically depicted. This does not, however, minimize Kyung-Chul’s actions towards the women.

What amazed me about the brutality and violence was that I never felt it was exploitative. As gruesome and as horrifying as the violence is, it didn’t make me feel unclean. Kim never revels in the bloodbaths. He doesn’t merely record it; he expresses an attitude toward it through Kim’s actions towards Kyung-Chul.

Horror and thriller films that rely on violence for thrills almost never scare me. I find it difficult to be frightened when bodies are hacked to pieces. The horror films that make me quiver do so through atmosphere.

I Saw the Devil mostly falls mostly into the thriller genre but it also contains the hallmarks of a successful horror picture. The atmosphere is unrelentingly chilling. The music is haunting. The lighting is often dark and shadowy. Night scenes are the most terrifying.

Half of the success in A Tale of Two Sisters, The Good, the Bad, the Weird, and I Saw the Devil is owed to style. The other half is Kim’s ability to direct his actors. I Saw the Devil would not be so chilling if it weren’t for Choi’s performance. I knew nothing about this character but he incorporates a cold, ultra-creepy persona. At the same time he’s dangerously alluring. His face, especially his eyes, has the same potency for unsettlement as Charles Manson.

I Saw the Devil is now playing at the Ken Cinema (for one week only).