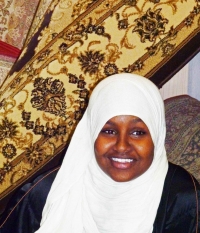 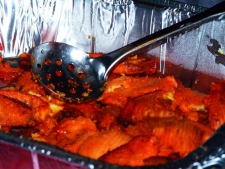 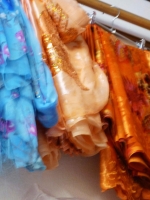 No, this isn’t a street scene out of Africa. It’s a new business incubator in the East San Diego neighborhood known as “Little Mogadishu” – a hub where refugees from war-torn East African nations such as Somalia, the Sudan, Eritria and Ethiopia are starting new lives in America, aided by the nonprofit organizations Horn of Africa Community and Somali Family Services. The Safari center has created 125 jobs for East African refugees, mostly women.  Now it's become a model that is being replicated in other U.S. cities.

An estimated 30,000 East Africans now call San Diego their home, incuding some 15,000 to 20,000 Somalis. They’ve fled civil war in the homelands, seeking freedom in the U.S. Many are attracted by San Diego’s warm climate, which is similar to their native Africa. “San Diego is home to the largest East African community in California, and the second largest nationwide, says Abdi Mohamoud, president and CEO of Horm of Africa Community. 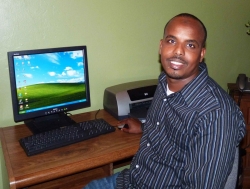 “My journey took three and a half months, through Brazil and South America,” Mohamed Ibrahim, 25, tells East County Magazine. He fled his homeland in Ethiopia because of fighting in the war-torn region. “I have a wife and kids, two kids,” he said, explaining that the journey was too difficult and dangerous to bring them. “We were hiding ourselves.”

Ibrahim is fortunate to have just been granted asylum in the United States, a status granted to those who a court finds would have their lives endangered if they were sent home. Now he is living at Project Refuge, a project run by La Jolla Golden Triangle Rotary and seven other local Rotary clubs in partnership with Somali Family Services. It is a temporary haven for those who come here alone, with no family here to help them. “Now I hope to bring my family here,” says

Ibrahim, who has learned to speak English in just a short time and hopes to soon find work.  He marvels at having free and open access to a computer at Project Refuge. In Ethiopia, where government censorship is practiced, using a computer “could get me in trouble,” he said. “Here, we have more freedom.” 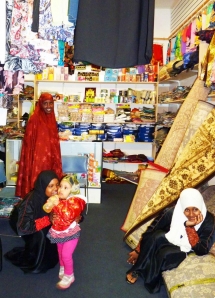 Attracted by San Diego's sunshine, many Africans ultimately wind up leaving for other areas with manufacturing jobs such as Texas, Tennessee, or even Minnesota, where chilly winters contrast sharply to the warmth of the immigrants' native lands.  Horn of Africa aspires to help African refugees and asylees become productive members of society by teaching them business skills, with costs now shared among all immigrants leasing space in the central bazaar reminiscent of the places they once called home.

Safari Market’s bazaar is home to 24 businesses-- including 20 that are refugee-owned. While some stock traditional African clothing and wares, others reveal a transition to America culture—such as the “Somali Footlocker” shoe store. There are also services, from a barber shop to a money-wiring outlet.

The Safari Market bazaar is located at 4348 54th Street, not far from San Diego State University's college area, and is open seven days a week from 8 a.m. to 8:30 p.m. Opened in June 2006 by Horn of Africa Community with help from numerous grant funds, the center helps the community of first-generation African immigrants remain connected to their homeland, while also revitalizing a run-down section of El Cajon Blvd. into a thriving multi-cultural center.

The immigrants strive to become financially independent as they learn entrepreneurial business skills. For customers, there are bargains to be found.  Dazzling beaded scarves in shimmering fabric are worn has head scarves by Muslim women, but are also popular with American women who wear them around their necks or as shawls in every color of the rainbow. 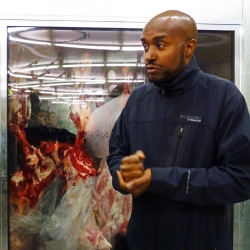 A second Safari Market has opened nearby, with a new Safari Grille next door. “I just launched Halel pizza,” owner Abdi Osman says proudly. “We don’t just cater to refugees. We have other ethnic groups who come here.”

Inside his market, a freezer beside a meat counter contains hanging carcasses of beef and goats, slaughtered under Islamic requirements known as Halel. “They bless the animal, make sure blood is let, and show mercy—you don’t show the knife,” Osman explains. “My beef is totally top round—nothing with fat.” Next, he will be expanding to add a bakery, he adds. 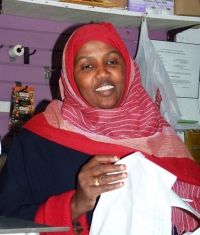 Across the street, at the smaller Muna Halal market, a four-ounce bag of cinnamon cost just $1.99; a large bag of cloves just $3. I know where I’ll be doing my shopping for holiday spices. Shoppers also peruse fresh produce, canned and bagged goods. African men and women pause to visit outside this neighborhood gathering place.

Somalis have been coming here since 1981, when the civil war in their homeland began. Most are clustered here, near University and 50th Street in the City Heights community, the neighborhood known as Little Mogadishu.

City Heights is a neighborhood that has long welcomed immigrants. Within the community are many Vietnamese and Chinese immigrants, an Asian business center, a Buddhist temple, a mosque, Middle Eastern and Mexican restaurants. 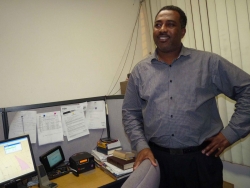 Some East Africans in the community have established successful businesses and are now hiring newer immigrants. Many are headquartered in College Plaza, such as All Nations Cab, which touts clean emissions. “We have a fleet that runs on natural gas,” Nor Tayeser said, offering a tour of the dispatch center.

Horn of Africa and Somali Family Services also assist African refugees with other needs, from finding English classes and jobs to helping them with medical needs. At times, that can be challenging. 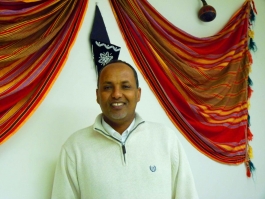 On a recent media tour of the East African community in San Diego, a Somali Family Services representative recalled a recent client who needed a gallbladder removed at a local hospital. “There was no interpreter,” she recalled, adding that state law requires that interpreters be provided to hospitalized patients who need them. Eventually, a solution was found. “They used a phone interpreter at four in the morning.”

For many newcomers from Africa who arrive at the U.S-Mexico border requesting asylum, the ordeal has only just begun. Most are placed in a detention center in Otay Mesa by Homeland Security, where they are warehoused with criminals while awaiting an asylum hearing.

If asylum is denied, they are deported. If asylum is granted, those without friends or relatives in America are dropped off on the streets of San Diego, where often a sympathetic cab driver will take them to Little Mogadishu.

Mohamoud notes that even while aid organizations struggled with limited finances, San Diego’s East African community members have shown a willingness to open up their homes and hearts to help the newest arrivals. He concludes, “There is really a strong community support.”

There is really a strong community support, Auto Scanner