While the TEA Party calls for tax cuts and slashing services, a new taxpayers' movement is outraged by some of America's biggest corporations paying zero taxes while reaping huge profits.  Now a national movement calling for corporations to pay a "fair share" has reached the streets in San Diego. 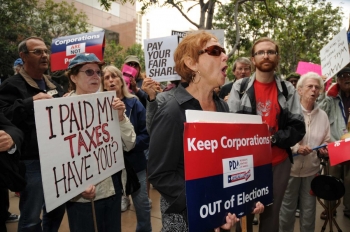 April 20, 2011 (San Diego) – Following the deadline for taxpayers to send in payments to the I.R.S., taxpaying members of U.S. Uncut San Diego, MoveOn.org and other community groups gathered at the San Diego Civic Center on Monday. Their goal?

Bringing to light the fact that some U.S. corporations are not paying their "fair share" of taxes and that working people of America are paying the price through cuts in social programs and essential services, say organizers. 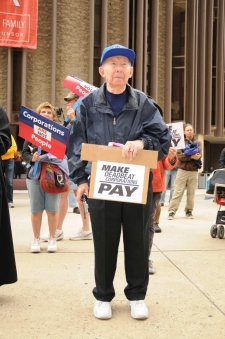 Approximately 75 protesters including East County residents marched from the Civic Center to the Bank of America building on B Street, chanting and carrying signs. Amid shouts of “I pay, YOU pay, why doesn’t B of A?” leaders attempted to deliver a tax bill to the branch manager for $3,950,000,000 – the amount the group says Bank of America should have paid in taxes since 2006.

Bank America paid zero in federal incomet taxes this year---yet did receive over a trillion dollar bail-out from the federal government.  Numerous other U.S. corporations also pocketed billions in profits while paying little or no income taxes.

The corporations contend that raising their taxes would hinder job creation.  But critics note that corporate tax rates have been higher in the past, during times of economic streng 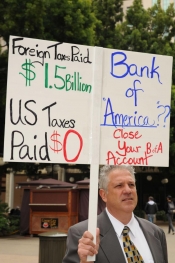 For more information including how to join the movement to end “corporate welfare”, visit US Uncut San Diego on Facebook (US Uncut | San Diego) or visit the website at www.USUncutSD.org.

I say May very well in no way long been on that blog page through a long while nevertheless it really was basically contentment to search out it again ever again. It happens to be this kind of fundamental content not to mention forgotten from a multitude of perhaps even gurus! I just regards for the purpose of rendering families further receptive to such factors. Solely amazing items depending on customary!Portuguese Translation

I pay taxes personally and through my small business corporation. It is only fair that ALL businesses are forced to pay their fair share of taxes otherwise the rest of us as a whole will have to make up for what they do not pay. beats for sale

This entry is too good. thanks a lot!!

Love the go after those evil corporations crowds. Does anyone really think corporations pay a single penny of tax? YOU pay that tax when you purchase products or services from them. If you charge them a million dollars of tax for your cheeseburger they will just charge you one million and one dollars for it.
We (U.S.) has come to the point that all large corporations will move out of the United States because of confiscatory taxation. The best way is to lower the tax to an absolute minimum so there is no need for the cheating (legal and non-legal).
We need to bring business back to America. These businesses will employ millions of Americans, here in America. With the "real" unemployment rate at near 16% and the rate for young black men at almost 25% we need jobs that increase the export of products and services to other countries not jobs packing the trucks of business going to foreign lands. This is not rocket science. Do you go down the street to buy your mild for $4.50 a gallon because it is close to you? Or do you travel a few miles to get it for $2.50 a gallon at Von's or Ralph's? I bet you travel. So will corporations except they will be in a different country not just a few more miles.

There are many honest companies that don't cheat and pay taxes.  Your arguments doesn't hold water to me.  Plenty of small businesses manage to pay taxes to help support America.  If they can afford to do so, giant corporations certainly can, too.

As for where those dollars go that we pay to buy companies' products, an awful lot of it goes into obscenely high salaries and bonuses for executives.

If companies choose to move overseas to dodge taxes, then we could solve that issue by imposing tariffs on all imported goods.  We should do that anyhow to give American companies that keep factories here an edge over cheap foreign goods that are often made in sweatshops or polluting factories overseas.  NAFTA, CAFTA and the whole "free trade" movement has been a giveaway to the multinational corporations.  Duncan Hunter Sr. opposed NAFTA, and he was right on that in my view.

What did we get out of it?  Cheap junk from China etc.  What did the corporations get?  The ability to use cheap labor and dodge US enviornmental laws, take away our American jobs, and pay no taxes while still selling products back to us--ad often shoddily made ones at that!