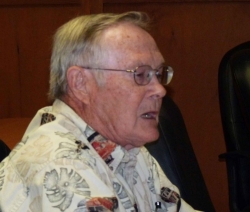 April 21, 2011 (La Mesa) – By a 4-1 vote, Helix Water District’s Board of Directors approved a new two-year memorandum of understanding (MOU) for its employees. General Manager Mark Weston said the “new reality” reflects recognition that employees need to share in pension contributions and that Helix pay rates and benefits are competitive with other districts.

But some ratepayers argued that the changes do not go far enough.

“So that’s the best you can do? Shame on you,” said East County Tax Hawks co-founder David Smyle.

The MOU calls for employees to pay 2% of pension contributions this year and 4% next year. New hires will pay 4%. “They should be paying 8%,” Smyle contended. “ Other than pay freeze, your employees have not suffered one bit, and they you’re giving them a cost of living increase, so it’s a wash.”

Gordon Place, a senior citizen who says he’s spent a lot of money redoing his yard and can’t afford rate hikes, noted, “We are the ones who are paying for this bill.”  Place voiced concerns over losing his home and having to move into a small condominium without enough room for his dog.

Other speakers urged the board to compare salaries and benefits outside of other water districts.

Russell Buckley, also with the Tax Hawks, said Weston should not negotiate for the Board since he is a pensioned employee.

Board members and Weston defended the Board’s action. Weston noted that the District has already cut 13 full-time and seven part-time positions. 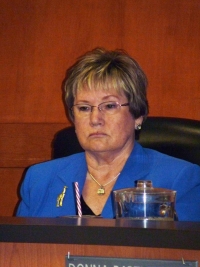 Director DeAna Verbeke said that where jobs have been cut, existing employees have “picked up the slack” and assumed additional duties. She and others expressed concerns that the district be able to maintain a skilled and reliable workforce. “We cannot hire replacements off the street,” she said, calling the MOU “fair and equitable” to both employees and ratepayers.

Director Kathleen Hedberg cast the lone dissenting vote. “I do not agree on the terms,” she said, adding that she believes “employees should pay their fair share.”

Weston said the move toward shared contributions needs to be done incrementally, observing, “With this agreement we remain in the middle of the pack” as far as benefits among other water districts. He added, “We have one of the lowest water rates in the area.”

Rates seem likely to go up this fall, however. A discussion on a staff report compared various alternatives for rate increases. Several members of the public voiced concerns over the prospect of large lot owners bearing the brunt of rate increases. While the exact amount of residential rate hikes remains to be determined, the majority of the board concurred that rate increases will likely be needed to cover projected costs despite heavy winter rains. Ironically, conservation by ratepayers has led to less demand—thus lowering revenues from water bills paid by ratepayers.

Hedberg raised concerns over rate hikes. “I can’t support these huge increases,” she said, adding that other budget items should be trimmed. “A 23% increase in capital improvements in this economy when my friends are losing jobs…I just cannot support this…I’d be more supportive if the District was using some reserves.”

ECM editor Miriam Raftery , a resident of Mount Helix, where a fire engine company has fallen victim to budget cuts, offered a suggestion that the board team up with San Miguel Fire to write a grant requesting Homeland Security funds to assist struggling ratepayers to keep landscaping alive for fire safety. She noted that some ratepayers who have lost jobs are struggling to stay in their homes and may not be able to afford higher water bills. Fire officials have expressed concerns over homeowners allowing landscaping in the area to die amid the economic downturn and rising water rates.

“This is a homeland security threat,” she observed, noting that the federal government picks up much of the tab when an emergency is declared from a wildfire. “If your neighbor can’t pay his water bill and lets landscaping die, when a wildfire starts, what happens to your home? Which is more expensive--subsidizing some water, or having another major fire burn out of control?"

Dexter Levy, a La Mesa resident, urged the board not to sell water below cost to any users. He also asked tha the Board establish a ratepayers advisory board. “Ratepayers do not get listened to,” he concluded.

You may not consider everything you just read to be crucial information about 70-536 exam. But don't be surprised if you find yourself recalling and using this very information in the next few days. We are in the early stages of forming an east county taxpayer group to bring to light excesses and abuses by any east county public agency. 70-646 exam The informal group will focus on ways to educate the public about government run wild and try to force change when needed through public participation. The Otay Water District voted last month to raise its consumption fees an average of more than 7 percent come January. The Padre Dam Municipal Water District is looking to lower rates but increase its monthly fixed fees. 70-680 exam A San Diego County Grand Jury report issued Tuesday said it expects consumer bills to continue climbing as agencies pay more for water and pump money into projects aimed at weaning the region off imported water. Sinkhole coverage is required by some mortgage lenders but it does not affect renters, condo unit owners, and homeowners with multi-peril policies who choose not to purchase it. And most Citizens policyholders with sinkhole coverage will not be hit as hard as those in the Tampa area, 70-662 exam where it's more common for the ground to shift and settle.

The line "Several members of the public voiced concerns over the prospect of large lot owners bearing the brunt of rate increases" is what concerns me the most.
From what I can tell, if you're a modest water user, you should be concerned at what the large lot owners are trying to do to the Helix rate structure. I just looked at the "Board Package" on the hwd.com web site and saw that some of the proposed rate structure alternatives discussed at yesterday's meeting would lower the water bills of the largest users and increase the bills of all modest users. This is outrageous! If you have a large lot and choose to irrigate it, then you should pay more and at a higher rate. I intentionally don't water a good portion of my yard to ensure I don't pay Tier 3 rates.
I hope other modest water users take note and let Helix know that this isn't right. It appears the large lot owners are the only ones making waves with the Helix board.