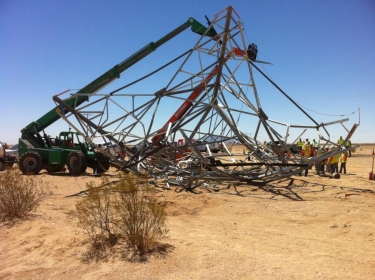 According to Pelley, the employee then approached another employee who appeared to be a supervisor. That individual got a camera and approached to within 20 feet of him, taking photos of Pelley, his truck and his license plate. “ he said, adding that he was disturbed by the actions and found them intimidating. “I asked ` Why are you doing this if everything is on the up and up? Are you trying to hide something?”

Even after the tower had crashed to the ground, Pelley said, “There was no rope,” adding that he was able to drive right through the roadway next to the dropped tower. “it took a little while for anybody to come out there,” he said, adding that the tower had fallen “on a trail used by ATVs right next to the road.”

He questions SDG&E’s statement that the road was blocked to traffic to protect public safety during the hoist operation—and wants to know why SDG&E didn’t want photos taken of the accident.

“They seemed to be trying very hard to get everything cleaned up before anybody came by,” he observed.

These incidents raise serious concerns over what caused the accidents and why SDG&E resumed operations before any findings were released to the public or media to demonstrate what caused the first accident—and what changes would be made to prevent another. In addition, the issue of witness intimidation also now arises.

SDG&E has stated that its operations were shut down pending an investigation of the June 7 accident. No explanation has been offered for the cause of the first crash. The utility later claimed in an e-mail to Supervisor Dianne Jacob that after completing repairs and testing the helicopter on June 9, the manufacturer, Erickson Air-Crane, approved the aircraft ready to resume construction work.

The next day, the air crane again dropped a tower. SDG&E claims the California Public Utilities Comission and the Federal Aviation Administration have been advised of both incidents. On Friday, SDG&E stated in a press release that it has asked the sky crane operator to provide a different helicopter and that operations were temporarily suspended—again.

But it remains unclear just which agency—if any—authorized Erickson or SDG&E to resume operations, or what caused either of the accidents.

The e-mail reveals that Jacob’s office had previously requested information on the June 7 incident from CPUC, but received no reply from the CPUC—only a promise from Billie Blanchard, project manager at the CPUC, stating regulators would provide details “as we get them.” No details have yet been forthcoming, ECM has learned.

Jacob has submitted a records request under California’s Public Records Act seeking “any and all documents related to the investigation “ into both the June 7 and June 10 accidents. She also seeks to learn results of those investigations and finally, which agencies approved the return of the air crane to service just prior to the second crash in four days.

“Supervisor Jacob would like to reiterate her strongly held belief that regulatory oversight over this project is severely lacking,” the e-mail added, noting that Jacob was “appalled” by a prior request for a CPUC investigation into a second incident involving an SDG&E helicopter and a protected eagle. “For reasons unknown to me, Sunrise regulators have decided to outsource my request for an invesgitation into a second strike to SDG&E, the company building the project,” Jacob wrote on June 8, 2011.

The letter from Jacob’s office June 10 concluded that “The utility must not be allowed to police itself.”

ECM has contacted the CPUC seeking records of the investigations and an explanation as to why SDG&E was allowed to resume operations. We have also asked the CPUC to examine our video of SDG&E’s site representative trying to squelch photography of the accident and asked whether it was inappropriate for the utility representative to take photos of the witness/photographer and his vehicle.  In addition, we've sent inquiries to the Federal Aviation Administration (FAA) and to the Occupational Safety and Health Administration (OSHA), seeking records and asking for comments.

ECM has also requested comment from SDG&E but has received no response.