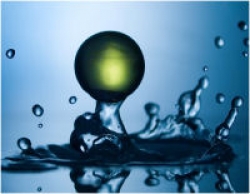 District officials provided citizens with a Power Point explanation and breakdown of the statistical reasons behind the proposed increase.  Those explanations didn't wash, however, with some irate residents who argued that the District should cut expenses rather than impose another rate hike on consumers in today's challenging economy.

The increases, which are scheduled to take effect on November 1 pending approval by the board in August, would amount to 5.9 percent, or around $6.46, for the “average” domestic consumer who uses 24 units (1 unit = 748 gallons) in a two-month period.

The proposed increase was not met with welcoming ears as citizens were told that though there was a wet year –rainfall met expectations – and residents were able to successfully cut down on their water usage they would still face rate increases.

"Conservation does drive up the cost to a certain extent," said General Manager Mark Weston. "There are fixed costs and overhead that need to be recovered in running the district. And there is less revenue with less water use."

The increases are largely due to the increased costs for the water district to pay its bills. Weston highlighted the fact that the wholesale water prices have increased 76 percent of the past four years; this year there is a 16.5 percent price increase, or $3.8 million, in water bought from the San Diego County Water Authority. A 4.4 percent increase in total expenditures and operating costs is another contributing factor for the proposed rates.

Many in the audience did not buy this excuse as alarmed citizens raised questions on why more cuts are not being made in order to impede the fast rising rates.

“We are paying 4% of what employees pay in benefits. We will be paying 30% of pensions alone come 2013-2014,” said Russell Buckley, who was one of many to raise concerns about the districts pension plans. “I think it is wrong and absurd to come to us with rate increases when you have not taken care of business.”

The citizen attack on pensions was not unexpected by Weston, who observed, “It is what people want to hold on to.”

Weston has deflected criticisms that Helix should follow the lead of neighboring Padre Dam Municipal Water District, which opted for a belt-tightening approach to cut overhead expenses instead of penalizing ratepayers who conserved water by jacking up water rate.

One Helix board member, Kathleen Hedberg, has suggested dipping into reserves or trimming capital expenditures as alternatives to raising rates for consumers.

The proposed water increases will still need to face a vote come August 17. The vote will be held during the board’s normal meeting time atf 2 p.m. Weston made it clear that if 50% of the public protests by providing a written protest, then the increase will cease to go into effect.

Viiew a video of the complete meeting, provided by Citizens Oversight Projects, at http://www.copswiki.org/Common/M1174