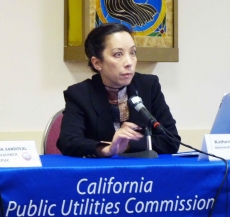 “For over a century, AT&T has set the bar for community involvement,” said Scott Alevy, president of the San Diego East County Chamber of Commerce. He added that he is impressed by the number of jobs AT&T has said it will create if the merger is approved, adding that “better service on the wireless end is very, very important.”

Faith Bautista with the Black Economic Council and National Asian American Coalition, which brought a contingent of students to speak, said the $39 billion merger is needed to meet the needs of “advanced technology for the students who are here today.”

Tiffany Fuertes, a community volunteer, also supported the merger, noting that “volunteers in rural and urban communities rely on their phones” and need improved reliability.”

A spokesperson with California Schools Association said the merger would provide more tools for educators that will amount to “an investment in our future.”

But Michael Thaller with the Campaign for Press Reform (CPR) San Diego observed, “I remember decades ago when AT&T had a monopoly and everybody had black telephones.” He said the company had no motivation for innovation and that with a merger, “The only things we can expect will be higher prices, less innovation and lower competition.”

Walter Carlin, a former airline employee, warned the merger would create an “oligarchy.” He said airline mergers amounted to takeovers that resulting in firing employees to cut costs. He gave a back-handed compliment to AT&T, however, for getting so many groups to turn out in support at the hearing, including many that received donations from the company. “They have reached out and touched somebody,” he observed.

ECM editor Miriam Raftery spoke at the request of two East County residents who were unable to attend the hearing. John Klacka, a llama rancher in Lyons Valley, faults AT&T for an outage that left him unable to call for help when his llama was bitten by a rattlesnake. The llama died and AT&T, which took six days to repair the line, failed to respond to his requests seeking compensation. Kimberly Hamilton, editor of the Deerhorn Valley Antler, has said she was left without phone service for two months by AT&T and was stuck paying a bill for much of the outage period. Raftery suggested that if the merger is approved, the CPUC require as mitigation that AT&T improve land line maintenance and give priority to adding cell service in fire-prone areas where communications reliability is critical.

Franklin Woods, a Palm Springs resident, said that after AT&T took over a competitor in his community, his phone rate jumped from $60 to over $100 a month. “The result will be increased profits, increased executive pay and bonuses,” he predicted.

Gracia Gracian, a political activist, said that “the company has demonstrated its treachery to the nation…when it started spying on its people a few months ago,” referring to revelations that AT&T provided Bush administration officials with information on AT&T customers obtained through warrantless wiretaps.

Michael Russell noted that “AT&T already owns the fiberoptic backbone that all carriers must use.” He expressed concerns over the impacts on Internet access, adding, “Unless you have net neutrality to guarantee access at the same speed for broadband for small business owners like me, you’re handing them a monopoly over our communications.”