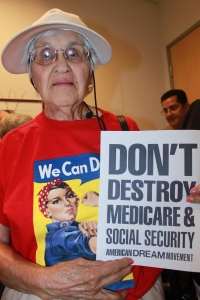 By T.J. Dunnivant
Miriam Raftery also contributed to this report

August 3, 2011 (El Cajon) -- For the second week in a row, voters staged a protest outside Republican Congressman Duncan Hunter’s 52nd Congressional District office to urge that their representative address needs of ordinary citizens over corporations and the wealthy. 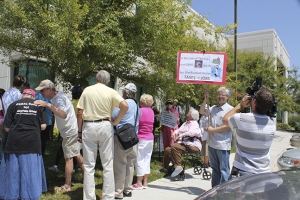 "The dominant themes were to protect the middle class and the social safety net,” said Bonnie Price of Spring Valley, one of about 40 to 60 protesters present. Voters spoke out in favor of tax fairness to stop favoring the rich and powerful, to “support unions because they helped create the middle class,” she added.

The protesters' views were echoed in a poll taken by East County Magazine, which found that three-fourths of readers (75%) responded that they believe big corpororations and the wealthy should be asked to pay a "fair share" to prevent the U.S. from defaulting on its debt, in order to avoid deep cuts to Medicare and Social Security.  National polls by major media outlets have yielded nearly identical results, making clear that the vast majority of Americans are opposed to slashing benefits for the elderly and the sick, particulary when no sacrifices have been asked of America's richest taxpayers. 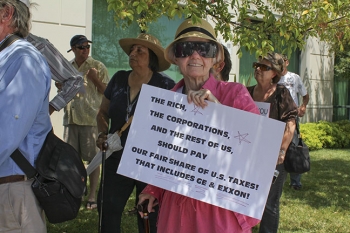 Forty to sixty protesters voiced frustrations over Hunter’s support for two proposed debt ceiling deals that would have deeply slashed social safety nets including Medicare and Social Security. A third debt ceiling deal ultimately approved by the House and passed by the Senate late yesterday got a “no” vote from Hunter due to his concerns over the impact on national defense, according to a press release issued by his office.

That measure, a short term action to prevent defaulting on the national debt signed by the President yesterday, contained a trigger that would require massive cuts in both social programs and defense if a bipartisan Congressional committee slated to make recommendations cannot secure approval of both houses of Congress.

“There’s no substitute for a strong national defense," said  Hunter, who also opposed handing over budgetary decisions to a committee. He also continued to blame social safety nets for the nation's financial problems.  "America’s fiscal outlook is serious," he said in a press statement issued after the final debt ceiling vote, "but we know what’s straining the budget and it’s not defense.”

The demonstration also attracted Hunter supporters, including TEA Party members and at least one libertarian, though at about half the number of those opposed to Hunter’s policies. Private security and El Cajon Police were also on hand.

The week before, on July 26, lack of space in the lobby area of the 52nd District Congressman Duncan Hunter’s office didn’t deter citizens from coming in and being heard. People in groups of 20 at a time squeezed their way into a jam-packed office and verbally gave their opinion on Hunter’s choice to support the issue of continued tax breaks for the rich and cut backs on programs such as Medicare and Social Security. 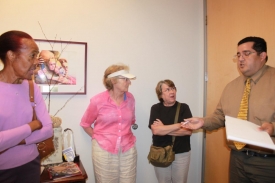 The call to action was prompted initially by East County representatives of the national progressive organization, MoveOn (http://front.moveon.org/). As stated in a MoveOn email, leading members emphatically stated, “We're putting out an urgent call for every patriotic American to show up outside the Republican congressional offices on Tuesday at noon to deliver a crucial message: "Don't destroy the American Dream." And that is exactly what the large group of more than forty concerned American citizens did. 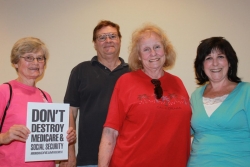 With signs in hand that read, “DON’T DESTROY MEDICARE AND SOCIAL SECURITY. THE AMERICAN DREAM MOVEMENT,” citizens were quick to lay into Duncan Hunter’s representative Chief of Staff, Ricardo (Rick) Terrazas. “I’m not going to be pulled into debates with any of you,” Terrazas kept repeating. “Tell me which plan you agree with for a solution to America’s debt ceiling?”

“They just need to get it done!” replied Nancy Blazy. “We don’t really get a lot of choice in the plan and they need to keep from holding it hostage over us,” she said, voicing concern over a ploy for Republicans to obtain their goals.

Linda Rosentha agreed by saying, “I’ve never felt so left out of the process….his [Hunter’s] constituents are not the rich people he is looking out for.”

“What’s wrong with the rich paying their taxes?” asked one 90-year old citizen wearing a Rosie the Riveter shirt that states, “We Can Do It!” That particular citizen was also holding one of the signs protesting the destruction of Medicare and Social Security.

Members of the MoveOn movement expressed positive comments regarding the amount of people who showed up and made their voices heard.

Chief of Staff, Rick Terrazas stated that he would take all the comments of the day back to Congressman Duncan Hunter for discussion.

By the second protest, several media representatives were on hand including KPBS television and print reporters.

“Participants agreed to participate in another demonstration in August related to jobs,” Price told East County Magazine. The date is yet to be determined.

In 1964, only 51 percent of Americans over 65 had health care coverage – whereas today, because of Medicare, coverage is virtually universal. He noted. In addition, the creation of Medicare has played a role in the poverty rate among seniors dropping dramatically. Nearly 30 percent of seniors lived below the poverty line in 1964 – and that number has dropped to 7.5 percent. Currently, Medicare provides comprehensive health care coverage to 47 million Americans, including 39 million seniors and 8 million people under 65 with disabilities.

“As we celebrate that success, we are reminded that House Republicans want deep cuts to Medicare and to replace it with a voucher system. In this time of great need, they voted to slash the program that has worked well for 46 years,” said Congressman Filner. “I agree that we need to strengthen Medicare so that it will be there for future generations, but gutting the program is not the way to do it.”

Republicans have contended that the cuts are necessary to control the serious issue of a soaring $13 trillion national debt, but have adamantly opposed all efforts to raise revenues as part of the solution, insisting that doing so would cost jobs and hurt the economy.