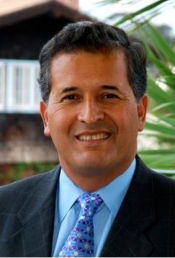 Vargas presented SJR 13 as a jobs protection measure for Californians who, Vargas says, would lose 15,000 green energy jobs if the turbine farm is built in Mexico instead of California.

The resolution calls on the Secretary of the U.S. Department of Energy to reject Sempra Energy's application for a presidential permit to construct the Energia Sierra Juarez trans-border transmission line between Mexico and San Diego County.

One portion of the proposed transmission project would consist of two miles of transmission line located in Mexico. That portion would be constructed, owned, operated, and maintained by a subsidiary of Sempra Energy Mexico and would be subject to the permitting requirements of the Mexican Government.

The remaining portion of the proposed transmission project would consist of a one-mile transmission line constructed by Sempra in the U.S. on private land. The line would run into a large substation that SDG&E seeks to build in Jacumba. From there, it would be transported into San Diego via the existing Southwest Powerlink, rather than the newer Sunrise Powerlink currently under construction.

According to the resolution language, “The line would undercut the investment that has already been made on the SWPL [Southwest Powerlink] Line and the Sunrise Powerlink. It would also deprive customers of the economic benefits of building the renewable generation in southern California. These lost benefits have been estimated at 15,000 lost U.S. jobs and $300 million in lost local, state and federal tax revenue."

“Preserving jobs during these tough economic times is a top priority, and this resolution will send the message that the loss of $4.5 million in human capital investment in Imperial County is not acceptable.” wrpte Vargas, who has announced plans to run for Congress to fill the seat vacated by Bob Filner, who is running for mayor. The Congressional district includes southeast San Diego County as well as portions of Imperial County.

Building turbines in California could boost jobs locally, but could also face opposition from area residents, some of whom have voiced concerns over health impacts, noise, and other impacts of wind farms in East County.