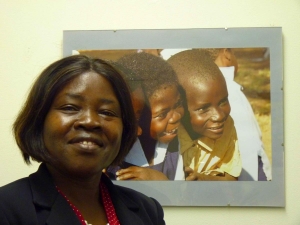 By Miriam Raftery
September 15, 2011 (San Diego) –From East Africa to East San Diego, women refugees have been finding help for their special needs through Nile Sisters. As the 501(c)3 nonprofit prepares for its ten year anniversary celebration this Saturday, September 17, founder Elizabeth Lou shared reflections with ECM on the many needs that Nile Sisters has filled since opening its doors in 2001.
“Before, some refugees gave birth in their apartments here in City Heights,” she recalls, noting that in Africa “aunties” serve as midwives  because men are not allowed to watch childbirth and it’s considered shameful to talk about such matters.
“They were scared; they didn’t know what to do with the placenta, so they would call 911 to take the mother and baby to a hospital," Lou said. "But afterwards, it was very difficult to get birth certificates and Social Security numbers for their babies, because there were no witnesses.” 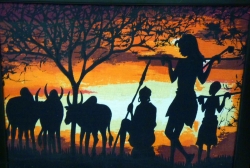 Today, Nile Sisters is able to offer free pre-natal care, with help from sponsorships by Kaiser Permanente and the California Endowment.   African women’s medical needs are unique. Many have gone without healthcare for years; some are malnourished, most have undergone female circumcision in Africa, and some have lived in refugee camps their entire lives, said Lou.
Nile Sisters provides refugees with hospital tours at Sharp Hospital that include the maternity room, labor and delivery areas, the women feel more comfortable. They also receive education on how to care for their babies.
“Our African women are different. They are shy….Culturally, there are differences,” Lou says. “Here they have a place to come and talk, to support each other morally and spiritually.”
Some problems are modest, such as women who may be embarrassed to tell a male store clerk that they need feminine hygiene products. Others are more serious, such as when a woman is widowed and may need counseling and emotional support. 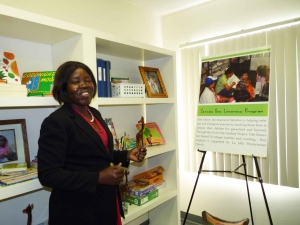 The office is warm and welcoming, filled with African art and photographs, children's books, and materials to teach expectant mothers about the birthing process.
Lou came to America as a refugee herself back on June 3, 1999. “The Sudan Civil War started long before I was born,” she said of her homeland. “I came here with my husband and five kids…There was a long wait, but my husband was working for the United Nations High Committee for Refugees in Kenya and his office facilitated us coming to the United States.” Today, she is happy that the Sudan civil war has ended and her country is now free.
Arriving in a new land brought many surprises. Lou and her family were first told they would be sent to West Virginia, but upon arriving in Washington D.C., they were informed by the International Organization for Migration they must travel on to San Diego instead. “We had no friends here, nothing. I was trying to imagine, what is California?” Lou recalled. “It was a very big transition.   I went to school in a big city and I visited other countries, Uganda, Kenya…so I am a city and a village person. But coming to the U.S is like going to a different planet!”
She was delighted to find refugees from her native Sudan awaiting her and her family at the airport. “They brought us home, had a reception for us with food. We were so tired! The following day, our children were all over the neighborhood.” The youngsters quickly made friends and soon, Lou recalls, “My house was full of children.”
But there were challenges. Finding a source for bottled water was the first challenge, since refugees are fearful of chemicals in tap water, she said. Daily tasks such as laundry and grocery shopping were all challenging at first. Figuring out complicated choices regarding health care plans proved even more difficult.
“The settlement agency, when you are educated they spend less time with you,” said Lou, “so my husband and I read the pamphlet and figured it out; we chose our doctor and a health plan.”
Riding a bus also proved confusing—a common problem for refugees. “In Sudan, Uganda and Kenya, in a bus there is conductor,” Lou recalled. The conductor would give change and provide information on routes. “Here, nobody talks to you. I did get lost the first time,” she said. “I got on the bus, I had my money.” But the bus didn’t move, since the driver was waiting for her to feed the fare box. “Somebody who was handicapped, in a wheelchair, wanted to help me and he gave me a paper.” After learning that it was bus fare, she said “I was very, very grateful. I said `Lord, thank you for this man.’” 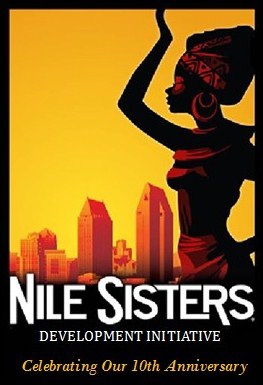 Her own struggles motivated her to start Nile Sisters. “There was no organization that helps women,” she explained.
Nile Sisters also assists men, on occasion. The organization mentored the famed “Lost Boys of the Sudan”, a group of about 100 teens who fled their war-torn homeland alone, arriving here with no family to help them. Lou and others at Nile Sister taught them skills such as how to shop for groceries, cook and clean house. They also help refugees learn English. Today, the Lost Boys are productive members of American society.   Most have jobs, many have graduated from college and started families of their own, Lou says.
“Elizabeth, she helped me a lot,” said Mong Thau, a refugee from Burma.  In Burma, he worked in an immigration office and was arrested after inadvertently issuing papers to a rebel. “For two weeks, I was abused, tortured,” said Thau. “There was no sleep. Every 15 minutes they would come to talk to me. Then they drop the water on my head, ten minutes at a time,” he recalled, adding that he was left wet and cold in his cell. Once released, he fled Burma with his wife and children, going first to Malaysia and eventually, America.
Through Nile Sisters, he learned English. Today, he teaches prenatal and literacy programs for African women through the organization. He assists women with filling out paperwork, takes them to hospitals and clinics, and also provides education on family planning. Some women are shy at first, and may even be hesitant to admit that they are pregnant. But they soon feel comfortable.
Nile Sisters is also working on a 10-year initiative for City Heights through the California Endowment, which chose the area one of 14 regions in California for building healthy communities.
The literacy program is an important component of Nile Sisters’ work. “When refugees come here to stay, they must learn, get educated, and go to school so they can get a job and contribute to this community,” Lou observed.
Many of the women are single parents, having lost a husband to war. Others were separated because their spouses could not qualify for refugee status, so they brought their children to a safe haven in America alone.
Children from Africa have often never seen crayons. “We give them crayons, pencils, erasers, everything,” said Lou. “Our volunteers go to the homes, and teach them [parents] how to teach their children.”  Parents, some of whom never went to school, don ‘t know what it takes to help their children succeed—so Nile Sisters volunteers also teach them such skills. “The house is the first classroom,” Lou will tell young mothers. “You are the first teacher for a child.”
Although much has been accomplished in the organization’s first ten years, there is still much work to do.
“We need more funding for our literacy programs,” Lou says. “We need to education the children….We need organizations like Nile Sisters to really work closely with families.”
On Saturday, September 17 from 11 a.m. to 1 p.m., the Nile Banquet will be held at the La Jolla Presbyterian Church to benefit Nile Sisters. Tickets cost $25.   To make a reservation, donate to Nile Sisters, or learn more about the organization, visit www.NileSisters.org.
View a video interview with Nile Sisters founder Elizabeth Lou.
View a video interview with Burmese refugee Mong Thau.