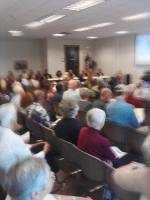 October 1, 2011 (Escondido)--In a workshop on September 28 regarding a proposed change from a general law city to a charter city, there were presentations made by various entities for and against the measure. Among some three dozen private citizens who spoke out, the voices were unanimously against the controversial proposal.

Councilmember Waldron had sent out a memo to the Escondido Chamber of Commerce Economic Development Council indicating that the 'workshop' is "basically an information gathering event, with experts from all sides, including the construction unions, the Associated Builders and Contractors, the League of Cities, and several think tanks offering information."

Presentations were made by the City Assistant Attorney based on information passed to the City Attorney's office by City staff, as well as by Tom Lemmon, Business Manager for the San Diego County Building and Construction Trades Council, W. Erik Bruvold of the National University System Institute for Policy Research, and Kevin Dayton of the Associated Builders and Contractors.

The biggest issues raised and commented on were Project labor Agreements (PLA's), Prevailing Wage requirements, the methodology of how Escondido would create a charter for the city, and what is perceived as the need for Escondido to change from a general law city to a charter city.

The council and most citizens who commented exhibited confusion about what PLAs as well as the link—or lack thereof--between PLAs and Prevailing Wage requirements. Ironically, the issue of PLA's may be moot if Governor Brown signs or allows to pass into law SB922, which would cut off State funds for public works projects if a city outlaws the use of PLA's for public works constructions.

Simply stated, a PLA is nothing more than a tool to manage construction projects and control the cost of such construction projects. They are used by both private enterprise and government agencies as a way to limit cost (e.g., eliminate cost overruns) and ensure that a project is built with a coordinated work force.

Prevailing wage requirements related to construction projects provides a means by which non-local contractors are prevented from coming into a local area and undercutting local contractors and wages. Additionally, prevailing wage requirements ensure that 20 per cent of all employees on construction projects that use public funds are apprentices, thereby providing young people the opportunity to become skilled tradesmen.

The workshop became rancorous and divisive, with the majority of the City Council being anti-union and most commenters in favor of using unions for public construction projects, with the remainder being neutral on the subject.

Councilmember Olga Diaz stated she has not had one citizen request or query about a need to change from a general law city to a charter city.

One commenter mentioned that the City of Vista has already expended over $175,000 fighting a lawsuit associated with being a charter city in a case being heard by the California Supreme Court in which the Court has told the parties to the suit to narrow their arguments to whether "Does the Prevailing Wage Law (Labor. Code, 1720 et seq.) apply to charter cities?" Costs associated with making any changes to a charter implemented -election was a concern also voiced by commenters.

Commenter Liza Prazeau and others present stated that the motivation for becoming a charter city -saving taxpayers money- was false given the council's history. She brought up the fact that the Council ( in August 2011) voted to approve a $72,500 fee waiver which the developer of a carwash had requested (citing economic infeasibility without the waiver) and that the Council had to amend the SPA (special planning area) and provide 2 CUP's (Conditional Use Permits) for the carwash to be constructed.

Councilmember Marie Waldron indicated frustration with commenters 'whining' about the closure of the East Valley Parkway library, the funding for which could have been covered by what the costs associated with putting the charter city initiative on the ballot will be.

Many commenters wanted any charter city ballot initiative to be postponed until the November 2012 general election with a couple of commenters indicating they would like to see any such ballot initiative pushed out even further to give citizens time for input and analysis of whatever the Council comes up with as a charter.

Escondido residents are already going to have to vote in the 2012 general election on the 'General Plan' for Escondido and citizens haven't had any Council workshops to discuss such a plan.

There is a citizens’ committee website where further information can be obtained: http://escondidocharterwatch.org/

Just ask the city of Santee, which had plenty of funds just before they snowballed the residents here to vote for it, like 70%. Right after the vote, Santee is broke. go figure.

Who voted for and against that?