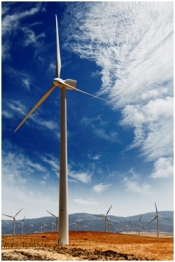 Those interested in commenting on the County’s proposed changes, as found in the draft environmental impact report (EIR), have until Friday, Dec. 23, to formally respond. Specific information about the proposed wind energy regulations, including the draft EIR and related amendments can be found on the County website (see links at the end of this story).

Much of what is proposed brings the County’s requirements in line with current wind energy technology and acknowledges the growing demand for renewable energy resources. But, the upshot of the changes could also bring more wind-generated turbines to rural areas of unincorporated San Diego County that just happen to have enough wind to attract the profit motives of energy companies. 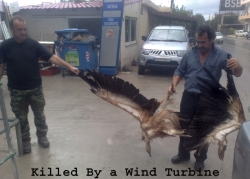 Proponents of wind energy support it as a sustainable and green alternative to fossil fuels and a means of reducing greenhouse gases and dependence on foreign oil. Opponents raise concerns over bird kills, noise, health impacts, wind turbine fires, and loss of views in rural and wilderness areas from turbines measuring up to several hundred feet in height.

Small installations of turbines -- such as those for homes or ranches where the power generated is consumed by the property on which the turbine is placed -- would be allowed as an accessory to property in a less exhaustive county approval process, if the ordinance is amended. The proposed changes define “small” as three or fewer tower-mounted turbines of a height not greater than 80 feet or five or fewer rooftop units that are within the height limits of the neighborhood zone in which they’re placed.

Joseph Farace at the County’s Department of Planning and Land Use said that when staff proposed easing restrictions on smaller scale wind turbines they relied on “guidance” established by California legislation enacted in 2009. Farace, who supervises the team of County planners responsible for policy and ordinance amendments, was referring to state Assembly Bill 45 (AB 45).

The state law limits the restrictions California counties can place on small wind energy generators.  AB 45 specifically tells counties, among other things, the levels at which they can limit noise levels, tower heights, and the types of turbines permitted in small installations.  To further comply with AB 45, San Diego County’s proposed amendment also changes the definition of small wind systems to be those generating no more than 50 kW. According to retailers of small wind systems, a 10 kW turbine is suitable for a typical home of approximately 2,000 square feet while a sum of 50 kW is enough power for light industrial or commercial use.

In addition to small systems, the ordinance amendment and the proposed General Plan amendment would establish new definitions and policy for large installations, defined as those with a capacity to produce more than 50 kW, regardless of whether the power is generated for an offsite utility or for the benefit of the property in which the turbine is installed. (AB45 does not apply to large-scale systems.)

The County’s proposed changes to regulations for large wind turbines are primarily “to be consistent with modern design specifications,” according to the draft EIR.

“Right now, they have to get a major use permit (MUP), which is a rigorous discretionary permit,” Farace said, referring to large wind energy projects. Farace said the MUP process includes passing muster with the County Planning Commission and receiving approval from the County Board of Supervisors. “What we’ve done in the ordinance is we’ve basically updated the technology but the process (of the MUP) is the same.”

Farace said that if the zoning ordinance is amended, some of the existing terminology and regulations in the Boulevard and Borrego plans would be “inconsistent” with the new ordinance. He said the General Plan amendments are an “option” but not required for the wind energy ordinance to be amended.

Several of the modifications for Boulevard and Borrego Springs are intended to make policies less “absolute” through changes in wording while retaining the “intent of the policy,” said County planner Matt Schneider, project manager for the wind energy ordinance.

As an example, Schneider said Boulevard’s current Community Plan uses the term “industrial scale,” the definition of which includes structures more than two stories tall. The proposed amendment would eliminate that specific definition and replace it with a broader description that could provide more leeway in evaluating development. Similarly, the proposed amendment replaces the word “eliminate” with the word “reduce” in its definition of the need for large energy production projects and takes wind energy out from under other more restrictive policy requirements, such as those pertaining to preserving Boulevard’s rural character.

Boulevard residents, represented by the Boulevard Planning Group, object to the proposed ordinance changes and General Plan amendments. What to some may seem as minor changes in wording in fact provides an opening for large wind energy developments in their community, the board believes.

Donna Tisdale, chair of the Boulevard group, cites an added sentence in the proposed General Plan amendment that would adversely affect her community. The policy statement in which the sentence was added also refers to prohibiting industrial-scale projects. But it states that “wind projects are not ‘industrial-scale projects or facilities’ for purposes of this Community Plan.”  Tisdale thinks this would be a significant change to the General Plan, which was just approved in August.

She’s also concerned the proposed ordinance amendments will create a new, more industry-friendly standard by which to judge large wind energy development during the MUP process. As large wind energy project proposals make their way through planning staff review, the Planning Commission and the Board of Supervisors, they’ll be judged on a piecemeal basis against less exacting requirements, Tisdale said.

Background on the county’s wind energy ordinance, the draft EIR and the proposed ordinance amendments and General Plan amendments can be found at the following links: