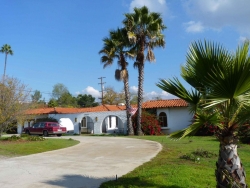 December 14, 2011 (La Mesa) –Mary Sweeney needs an angel. Like many Americans, the automotive industry consultant lost her home to foreclosure in the down economy. The lender, IAF Pension Inestments LP in San Diego, has given Sweeney notice to vacate by December 31—along with her wheelchair-bound 83-year-old mother. Her mother’s caretaker, a formerly homeless woman helped by Sweeney also faces the prospect of being on the streets come New Year’s. So do the family’s three dogs and a cat.

“I am a Christian and I still believe it may be possible to find an investor to buy our home from the lender and lease or sell it back to me, so Mom can stay here and I can implement the residential care plan I have worked on for two years,” said Sweeney, who purchased the home at 10545 Grandview Drive on Mount Helix for her mother 17 years ago. “She is heartbroken.”

Sweeney has searched for a new home but has been unable to find an affordable place that is wheelchair accessible.

She told East County Magazine that she ran into trouble after payment for an automotive contract was delayed; she took out a line of credit on her home and was unable to make a balloon payment due. “I told them I would pay the same principal and interest, but they would not work with me and foreclosed,” she said of the lender.

Attorney Jay Stoffel with IAF declined to discuss details of the foreclosure, but noted that Sweeney had filed for bankruptcy. Sweeney says an Orange County attorney forged her signature and defrauded her after promising to help her save her home.

“My reputation is my most valuable asset,” Sweeney told East County Magazine. She forwarded letters of recommendations from several employers, including the customer care manager at Volvo Cars of North America, LLC, who thanked Sweeney and her team for “your hard work and dedication.” He also praised her expertise, commitment, and work ethic.

But the highest praise for Mary Sweeney comes from Tricia Stone, the woman whom Sweeney rescued in August. Walking her dogs in a local park, Sweeney found Stone alone, crying. Sweeney asked what was wrong and learned that Stone had lost her job and been evicted, along with her two cats. Now homeless, she was living in the park—and one of her cats had gone missing.

“I can provide witness to the true nature of both Mary and her mother,” Stone told East County Magazine. “Mary, not knowing me, never met me before, invited me into her home.” Sweeney gave Stone a room in her home, a laptop computer to use for job searches.
Then when a part-time caretaker position for Sweeney’s mother became available, Stone got the job. She also works part-time for Vons.

“With her help and blessing, I am now on my way to standing on my own two feet again,” Stone says of Sweeney. She says the Bible verse, Matthew 25:35, describe’s Sweeney’s nature. That verse reads:

“Through her random acts of kindness, my cat and I have a brighter future than we did four months ago,” Stone reflects. But she adds, “With a sad twist of fate, she and her mother are losing theirs. This is not just a beautiful house. This is their home. Of course there is no way I could ever possibly repay them, such as finding an investor to save their home. Yet, as I lived those weeks at the park, I didn’t give up. I kept believing somehow, some way, I would get out of there.”

Stone continues to have faith. “I believe somehow, some way, something good is going to happen,” she concludes.

The time for miracles is nearly out, however. If no angel buyer for their home is found by December 31, the Sweeney household may soon be on the streets.