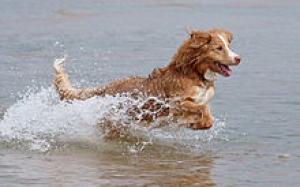 January 12, 2012 (Jamul) – In the  Honey Springs Ranch/Deerhorn Valley area of Jamul, some residents are  crying “fowl” over a proposal by private sporting clubs to create “dog ponds” on public lands.  The ponds, one the size of a football field and a smaller“puppy pond” would be used to train hunting dogs to retrieve live birds in Hollenbeck Canyon Wildlife Area, a state-owned preserve.

Why are neighbors howling?  At least 53 residents on Honey Springs Road say they were never notified when the California Department of Fish and Game (DFG) held a comments period. Now, long-time residents and hydrology experts say that pumping water to fill and maintain the ponds could deplete groundwater supplies, leaving neighbors with dry wells.

Residents were shocked to learn recently that one pond has been given a “final” California Environmental Quality Act (CEQA) designation.The two ponds together would require an estimated 2.4 million gallons of groundwater to fill and an equal amount each year to maintain.

But long-time residents of the area recall that back when the land was privately owned and a Honey Springs housing development was proposed a water test was down.  “When they tested the well at the ranch, the draw down was so great that nearby wells ran dry,” wrote Kim Hamilton, editor of the Deerhorn Valley Antler.

In San Diego's wildfire-prone East County, well water is used for fire protection in addition to providing water for homeowners and livestock.  A dry well at an inopportune time can be a life or death matter--or the difference between saving a home from wind-blown sparks or seeing it reduced to ashes in a firestorm such as the 2007 Harris Fire that leveled many homes here.

Tom Lamb, a long-time resident of Deerhorn Valley in Jamul, was a geologist who reviewed those groundwater studies.  “I was privy to some of the test results, such as very limited pumped flow rates and stories of significant drawdown of well water levels on adjacent properties even while the pumping tests on the Honey Springs Ranch were being conducted,” he confirmed.

Lamb calls the proposed dog ponds project “ridiculous” and raised additional questions.  “Would they use existing wells or drill new ones?” He asked. “Are the ground water pump tests and report done in the ‘70s available for review? Has Cal Fish and Game conducted newer tests?”  He also raised concerns over long hours of pumping, algae treatment, and costs.  “How many people would benefit?” he asked.

The proposal was put forward by three hunting groups: San Diego Retriever and Field Trial Club, Inc., San Diego Hunting Retriever Club, Inc. and the North American Versatile Hunting Dog Association.  The groups have already banded together to open a dog training facility in the Hollenback Canyon Wildlife Area; the ponds would be an expansion.

“Our goal was to develop a first-class training facility for training sporting dogs,”Bob Smith, president of the San Diego County Wildlife Federation and a member of the North American Versatile Hunting Dog Association’s local chapter, told the San Diego Union-Tribune at a December 2010 opening of the facility.  “In the process, we helped restore natural habitat and native wildlife by removing non-native plants (particularly foxtail) on this incredible property.”

The ponds would double as wildlife habitat when dogs are not present. Ponds and the other portions of the facility are for dog training only, including use of live birds brought in for the animals to retrieve, however no actual hunting would be done at the site.

The location is accessed off Honey Springs Road from Highway 94 east of Jamul.  Originally inhabited by Kumeyaay Indians for thousands of years, the property was later part of a Spanish land grant under Pio Pico.  It became home to the Daley Ranch and later, other owners before the transfer to state ownership.

But some local leaders think advocates of the hunting dog ponds in an areas of scarce groundwater are barking up the wrong tree.

Supervisor Dianne Jacob, on January 6, 2012 penned a letter to a concerned citizen, Rita Philo.  “I agree with you that local groundwater should not be compromised as a result of this project and that any ponds should only be created using water run-off,” Jacob wrote. But she noted that the County has no jurisdiction over the project, but is merely a party of interest.

The County has provided comments to the Jamul-Dulzura Planning Group and the California Department of Fish and Game.  In a letter dated December 2, 2011 to Michael Casinelli at the Planning Group, the County’s Groundwater Geologist Jim Bennett raised serious concerns as well.

Bennett conducted a review of potential impacts on groundwater from the dog training ponds—and casts serious doubts on the data that proponents relied upon.

He cites a 2009 report which indicated that the ponds would be obtaining water from the existing Hollenbeck well.  “Unfortunately, the well completion report for this well is missing from County Department of Environmental Health Files,” he revealed.

Bennett said a 2009 report provided by the planning group stated that the well originally produced 800 gallons per minute. “This is more than likely an error, as there has never been a well among hundreds that I have reviewed within a fractured rock aquifer that could produce at such an extraordinary rate,” he observed, adding that the County Department of Planning and Land Use historically monitored water levels at Hollenbeck Well from 1982 to 2008.  “Water levels within this well have varied between 3 and 179 feet,” he stated, adding that the aquifer beneath likely has “a low storage capacity that is subject to localized rapid declines in the water table.”

The project would use nearly 10 acre-feet/year, or the equivalent in annual groundwater consumption of that used by a 20-lot residential subdivision, Bennnett calculated.  There are 18 single-family residences within a half mile of the Hollenbeck Well, with the closest just 480 feet from the property line, leading Bennet to conclude that “there is the potential that pumping at this rate could result in potentially significant impacts to off-site groundwater users.” Further study is needed, he said, adding that if the project goes forward, more distant wells should be considered as water sources.

On Friday, Supervisor Jacob held a meeting with Ed Pert, the regional manager for DFG, as well as representatives from the County’s Department of Planning and Land Use, the Jamul/Dulzura Planning Group (JDPG), and Honey Springs Homeowners Association.

Hamilton indicated that according to Pat Terry from the homeowners’ group, “Ed Pert from DFG seemed willing to work with residents, and Supervisor Jacob stated that well water should NOT be an option!” A list of concerns has also been drafted by the Jamul/Dulzura Planning Group.

In a Deerhorn Valley Antler message posted January 6, Terry concluded, “We are hopeful of a positive outcome—and no need for lawsuits.”

On January 10, 55 people attended a meeting of the JDPG. “That’s huge for us,” Hamilton told ECM.    “It’s a state issue, so those affected are relegated to give “input,” she said, clearly dissatisfied.  “Kind of like Powerlink going through BLM [Bureau of Land Management] land—one guy had final say.”

A local fire service was never notified, Hamilton added.  “They depend on the same groundwater, too, and CEQA just went ahead and gave it a pass.”

A representative from Assemblyman Brian Jones was also present at the meeting.

The planning group will send a letter to DFG’s regional head to list issues of concern.  In addition,  DFG has indicated that a newly formed subcommittee will meet this Saturday with residents and the San Diego County Wildlife Federation (a hunting group), DFG representatives and others.

Whether bird-dogging the issue by citizen watchdogs succeed in drying up sporting clubs’ plans for dog training ponds in Deerhorn Valley, however, remains to be seen.