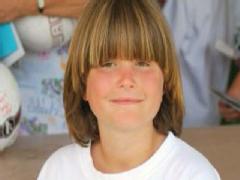 The defendant has been charged with murder and felony assault, but because of his young age his case will be handled in the juvenile justice system, where he could face detention until age 25.

"This is a tragic, tragic case for everyone involved," Deputy District Attorney Victor Barr told reporters outside a courthouse yesterday.  Inside, the youngster pled not guilty “at times looking uncertain as to what was happening around him,” the San Diego U-T reported.

The defendant’s name will not be disclosed because he is a minor. His lawyer has questioned whether the boy is capable of understanding the proceedings and assisting in his own defense. A competency hearing has been scheduled for February 23 and he will undergo a psychiatric evaluation first.

The boy, who is adopted, reportedly has had problems stemming from birth. Neighbors described his mother as a good parent who had been trying her best to try and help her son.

One neighbor indicated that the boy had recently been put on a new medication for attention deficit disorder and soon after, gave another child a black-eye before the fatal stabbing occurred in a kitchen where he had been paying with friends.  Previously the boy’s behavioral issues had been primarily yelling and tantrums, neighbors said.

Some attention deficit disorder medications are known to have serious side effects and some carry warnings. According to the U.S. Drug Enforcement Agency, for example, Ritalin has been known to induce “psychotic episodes, violent behavior and bizarre mannerisms” in some individuals.

“Please don’t make it out that he was some terrible human being. He was no monster,” the victim’s mother said of the boy who killed her son, 10 News reported.

The stabbing occurred in January 16 in the driveway of the victim’s home in the 12500 block of Royal Road.  Paramedics transported him to Children’s Hospital, where he died a short time later.

Ryan Carter was his parents’ only child. He was a student at Foothills Christian Elementary School in Lakeside. His parents formerly resided in La Mesa, but reportedly moved into a mobile home in Lakeside in hopes of saving money for a college education to provide Ryan with a better future.

Services for  Ryan will be held at 10 a.m. on January 27 at the Foothills Christian Church 365 W. Bradley Avenue in El Cajon.  A 12:30 reception will follow at the Santee-Lakeside Elks Lodge, 11633 Woodside Avenue in Lakeside.