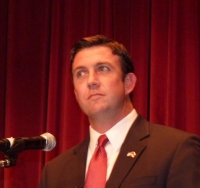 January 25, 2012 (Ramona)—Politics does indeed make strange bedfellows. On February 3rd, members of the liberal Ramona Forum will join forces with conservative members of the TEA party to demand the resignation of Congressman Duncan Hunter. The protest will be held at Rep. Hunter’s office, 1870 Cordell Street in El Cajon, from 1 to 4 p.m.

“I am going and I know some Tea Party organizers who are going,” said Terri Linnell, Tea Party member who is running against Hunter in the Republican primary. The local protest is part of a a national movement to protest the National Defense Authorization Act, which was signed into law by President Obama in December 2011. Civil libertarians have objected to the bill on grounds that it could allow the indefinite detention of U.S. citizens.

“We hope that members of Occupy and other people willing to stand up in support of our great nation will join us at Duncan Hunter’s office,” said Dave Patterson of the Ramona Forum.

While language was added that sought to address opponents’ concerns before the bill was enacted, some Constitutional experts believe the wording is not air-tight and that the bill still allows the potential for indefinite detention.

“That’s against the Constitution,” says Linnell, who said objections to the measure are also being voiced by conservative Oath Keeper members as well as Tea Party members. Some Liberal Democrats and Libertarians share the same concern. “By voting for it they broke their oath uphold the Constitution,” Linnell observed. “They voted to allow this.”

Patterson agrees. “Clearly Duncan Hunter, along with nearly 100% of the House of Representatives and Senate, violated their oath to support the Constitution of the United States when they voted for the latest changes to the National Defense Authorization Act (NDAA)…The 2012 NDAA authorizes the military to snatch American citizens from their homes and hold them indefinitely without charge. For this Hunter, and others, need to be removed from office through legal means, or as we will demand on February 3rd, to resign immediately. The 2012 NDAA is part of a long line of assaults on our liberties that provides an easy transition to Totalitarianism.”

He concluded, “Party and ideology aside, now is the time for all great men to come to the aid of their country, and we begin with a demonstration in front of Duncan Hunter’s office in El Cajon, February 3rd at 1 p.m.. We ask that all law-abiding citizens willing to demonstrate peacefully join us.”

In the House and Senate, bills to repeal the NDAA and prohibit indefinite detention of U.S. citizens have been introduced by both liberals and conservatives, including California’s Democratic Senator Dianne Feinstein and Republican Ron Paul.

A petition calling on Congress to undo the NDAA has also been set up: http://act.demandprogress.org/letter/ndaa_reversal/?akid=1117.406867._mcrIl&rd=1&t=2

"We looked hard at this," he said. "There are two 'problems' that people say they have with it: indefinite detention of US citizens without due process and military authorization to do domestic arrests. These aren't true. As (Congressman) Tom Rooney of Florida said, 'You can't trump the Constitution. You can't just write something and pass it.'"

In our Constitutional framework the Senate's purpose is to assure majority aphorism which explains why Senate Democrats haven't acclimated the nuclear AKA "constitutional" advantage to annihilate the delay with 51 votes.

This action by both the Tea Party and members of OWS should not be dismissed.  When activists from both the left and right come together on an issue, it is important.

In the name of "our security," our representative, Mr. Hunter, along with many others, has removed a vital part of our fundamental liberty.

Mr. Hunter, on 4 Feb 2011, also voted for HR514 which allows the FBI to use "roving wiretaps" on citizens, access "any tangible items," such as library records, and surveil American citizens who are NOT part of any terrorist group.

As Ben Franklin said, "Anyone who would sacrifice liberty to obtain a little security, deserves neither and will lose both.

I will join Terri Linnell, and the Tea Party and OWS, on February 3rd.  It is precisely in these times, when many people live in fear and uncertainty, that our liberty is most in danger.

Those representatives, including Mr. Hunter, by striking down the basic liberties that define us as Americans, have violated their pledge to support and defend the Constitution from all enemies, foreign and domestic.