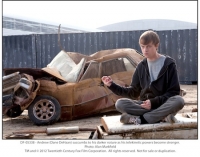 February 3, 2012 (San Diego) – In 1999, The Blair Witch Project popularized the “found footage” genre. Thirteen years later its influence has been felt in movies from as close to home as here (Cloverfield) to as far away as Norway (Trollhunters). Chronicle is a noble attempt at the genre, but the gimmick here is unnecessary. It severely undermines what could have been a good movie.

The “chronicle” is of the lives of three high school boys who gain superpowers from an indeterminate object. Andrew (Dane DeHaan) is a troubled teenage filmmaker. Matt (Alex Russell) is his cousin and reluctant film subject. Steve (Michael B. Jordan, seen recently in Red Tails) is Matt’s friend. After gaining their superpowers, they have fun with them. But Andrew, verbally and physically abused by his dad and a gang of bullies, uses his powers to hurt people.

All of this is seen through various cameras, mostly Andrew’s.

Despite becoming endowed with supernatural properties, such as levitation and flying, the boys are true-to-life teenagers. They speak like real teenagers, with unsophisticated, unpolished dialogue littered with crutch words and phrases such as “you know” and “like.” Just like in an amateur documentary, the teenage participants don’t act naturally; the presence of a video camera affects how they speak and how they conduct themselves.

The special effects begin as minimalist, small, and uncomplicated. It’s appropriate, since the boys learn how to develop them in the same way a five year-old kid learns to ride a bicycle. The growth of these abilities is organic. First there’s telekinesis, such as the simple acts of assembling a Lego space station and scaring a girl with a floating and talking teddy bear. Then they learn they can fly. Am I the only one who doesn’t recall a scene in any previous movie where characters play football at least five miles above ground?

The footage doesn’t suffer from an overly shaky camera. It frequently moves and bobs around, but it rarely jiggles. The action is always comprehensible. In addition to Andrew’s camera, the director includes footage from security cameras, helicopter cameras, and other people’s cameras.

Therein lies the problem with Chronicle’s shooting style. It quickly becomes so trapped by its constraints and rules as a “found footage” movie, that by the end it starts grasping for straws and stops becoming one altogether.

For example, the beginning establishes that the footage will come from Andrew’s camera. But what about scenes where Andrew isn’t present? Or scenes that require multiple angles, like the scene at the rave? Chronicle’s solution is to make Matt’s crush (Ashley Hinshaw) a professional videographer as well.

At times the format results in shots that defy common sense. The most egregious is the sequence where Andrew, desperate for money to pay for his sick mom’s medicine, “beats up” and robs the thugs in his neighborhood. Then he holds up a convenience store.

These scenes are essential to the plot, but the director needed to find a way to include them while staying within the rules of the film. So he has them filmed from Andrew’s video camera. The result is illogical. Why on Earth would Andrew deliberately film his criminal acts? Wouldn’t he know that this would be used against him in court?

Worst of all, the shooting style served only to remind me that I was watching a movie. This became apparent once it kept cutting from Andrew’s camera, to the helicopter camera, to the camera in the skyscraper where Matt and Andrew crash through the walls, and so on. It reeks of desperation.

Writers Max Landis and Josh Trank fail to find a consistent tone. It’s all fun and games until Andrew makes a car go off the road, nearly killing the driver. When the ending arrives, Chronicle is a completely different movie. It’s like a bad ending of Carrie.

I appreciate what the filmmakers were trying to do. But in the end, the gimmick is Chronicle’s own worst enemy.