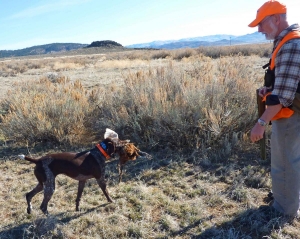 February 4, 2012 (Jamul)—Revelations that public funds have been awarded to a private hunting club to develop hunting dog training ponds in the state-owned Hollenbeck Canyon Wildlife Area has heightened controversy over the project.

Whether that's a positive use of funds (collected from poaching fines) or a boondoggle, however, depends on one's perspective.

Hunting groups contend that the funds include habitat improvement and that creating the first water-training facility for hunting dogs in San Diego County is an appropriate use of monies collected from fines on poachers, or illegal hunters.

But residents near the site on the former Honey Springs Ranch in Jamul contend groundwater pumping could drain their wells. Some neighbors, as well as a government watchdog, also question why a County commission charged with protecting wildlife has allocated funds to a private hunting group.

“Smells like a boon-dogpile to me,” said Ray Lutz, founder of Citizens Oversight Panels,  a government watchdog group based in East County.  “Public funds should be used for public uses, or for nonprofits who serve the public. Not for a private hunting fund.”

He questioned why the County ‘s commission authorize six grants to a private sports hunting organization.  “Sounds like they are mostly involved here with not wildlife, but domesticated dogs,”  noted Lutz, who noted that the funds could better be used for other purposes. “There are many backcountry needs that everyone can enjoy.”

Although the grant funds were approved by the County’s commission, no county taxpayer money was involved. The funds are provided to the County from the State out of revenues collected from game poachers and  by state law are restricted to use for conservation purposes.  According to a policy statement from the California Fish and Game Commission, “The training, testing and trialing of hunting dogs facilitate hunting in that the use of a trained hunting dog is recognized as a conservation tool which will increase the recovery of downed game.”

The County’s Fish and Wildlife Commission, however, has a somewhat more narrow mission statement to serve the public by providing advice, funding and participation “on issues and projects relevant to the prudent use, protection, and perpetuation of San Diego’s wildlife” including habitat protection.

“Really?   Is creating artificial wetland out of native inland chaparral considered an `improvement’ of habitat?” Hamilton asked in a January 28 letter to Supervisor Dianne Jacob.  “Millions of gallons of groundwater will be required to create and maintain these ponds—for the purpose of training hunting dogs and attracting waterfowl (who do not now populate the dry chapparal).”  Neighbors have protested that they were not informed of a CEQA review and fear that pumping could drain their wells.

Only Commissioner Suzanne Hall questioned the appropriates of an award to the SDWF for the dog training ponds.  One Commissioner, Florence Sloane, even made a motion recommending that Supervisors oppose a change in the DFG code that would have required groups like SDCWF to help fund costs of programs that benefit their members.

Bob Smith, president of the SDWF, defends the decisions.  “The facility is in fact a conservation tool and that is part of the mission of the Wildlife Advisory commission,” he told East County Magazine.  “We planted wild oak trees…part of the plan is to replace invasive species with native plants.”  Funds have also been used to cut down eucalyptus trees killed by a wildfire (posing safety problems to the public) and to repair a pump damaged by the fire, he said.

“As far as hunters are concerned, we consider ourselves to be conservationists, not preservationists—we do take game but only when there is a sustainable population,” he observed.  “A lot of people say that hunters and fishermen are the ultimate conservationists because we spend a lot more money on habitat restoration than others.”

Although the federation is open only to members who support hunting, Smith said the ponds would be open to the general public, available for anyone to use.

Smith said his federation represents five hunting dog clubs and a tracking dog club which together have at least 300 members. Many non-members also have hunting dogs locally, he added. The sport is growing, he said, noting that his own club chapter’s membership has tripled from 20 to about 60 people in the past decade.

“The whole rationale for this is there is no other pond publicly available in San Diego County for training a dog for retrieving,” the sporting clubs' spokesman said.

If approved, the dog training ponds would utilize “dummies and dead ducks” for the water training.  The Honey Springs facility already has a field training area for hunting dogs, without water.  That facility does have live-shooting of birds, primarily feral pigeons, said Smith.

Smith admits that the groundwater issue is a legitimate concern, and says he was unaware that there were “so many marginal wells in the area.”  He said the federation is trying to come up with a solution.  He’s held meetings with residents, local planners, Supervisor Jacob and representatives from the California Department of Fish and Game (DFG) to discuss options that could include moving the site of the ponds to a different location within the Hollenbeck preserve that is farther from homes and has “a very productive well,” according to Smith.

“We’re trying to come up with a solution,” said Smith.  Moving the location could prove feasible, he indicated, but would cause delays of perhaps a year or two.  One potential alternative site is on the east side of Highway 94 on land formerly used for cucumber farming.

“Fish and Game did not get any CEQA approval for putting a pond there,”  Smith noted, adding, “There’s alwaysa  cost issue beause we’ve already invested some money in designs…we had to do a topographical survey.”  In addition to funds approved by the County, the federation also raised about $600 from dog club members and $800 from the National Wild Turkey Federation to install drip irrigation on the native oak trees that the federation planted.

Smith readily admitted that the federation erred in not notifying the local Rural Fire Protection District. But he added, “We have a 65,000 gallon water tank out there; we think we are actually helping to solve the fire problem. But what we didn’t do was have the Fire Department come out and look to make sure it has the right connections and room for a fire truck to turn around, etc.”

Tom Lamb, a geologist who reviewed a prior well test at the site of the original place proposed for the dog ponds, estimates that a professional hydrogeolic study with new well pump test could cost upwards of $100,000—raising a question of who should pay for such testing at the current site. He further contends that funds for pumping hardware ($4,360) was “really a stretch” of the commission’s mission statement.

Supervisor Jacob noted that although the project is on state Fish and Game property, “I support the residents who don’t want groundwater used for this project. In addition, the County has expressed its concerns to Fish and Game about the use of groundwater.”

Jacob said the DFG has agreed to work with the community to address concerns and that a DFG representative is expected to attend a February 14 meeting of the Jamul Dulzura Community Planning Group.

Terri Stewart, environmental program manager at DFG’s South Coast region, told ECM that her regional manager, Ed Pert, has met with Supervisor Jacob as well as County staff, Jamul-area residents and planning group members to address their concerns.  “We have committed to working through each of these issues and agreed to not do anything that will have adverse affects on the groundwater situation,” she said.

Lamb summed up the sentiments of many area residents.  “I am hopeful that the hunting dog groups and CDFG will find a better place to make and fill and maintain ponds for dog training,” he said.  “Community members, especially those that depend on the local aquifer in the limited Honey Springs Creek drainage area… would like to see the pond project moved.”

He questioned why the state failed to notify residents, planners, and fire officials.  “The writers and signers of the CEQA report, if they ever stood at the pond sites on Honey Springs Ranch, could simply face east, look around, and see at least 10 houses within 10 minutes walk. “ Looking at a map would have shown over 45 properties in the immediate watershed drainage, most with wells, he noted, adding, “It was appalling to me that the people preparing the CEQA report mentioned several far away communities, but did not mention in the report or bother to contact any of the adjacent and nearby property owners about this project.”

Lamb questioned the legality and motives behind the CEQA study.  “I feel the ultimate question about the 2008 CEQA report  is this: `Is it just flawed, or is it fraud’?”

He further hinted that legal action may be taken if an appropriate solution is not found.  “We do not want to play hard ball, but will if need be.”