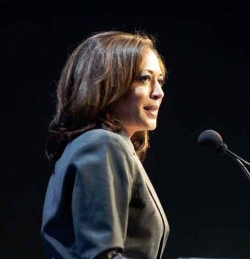 “I will tell you that’s 900 percent more than the crumbs the were putting on the table,” Harris told delegates at the California Democratic Convention in San Diego on Saturday.

Under the settlement,  prosecutions can also be filed to hold banking industry representatives criminally liable for their actions. 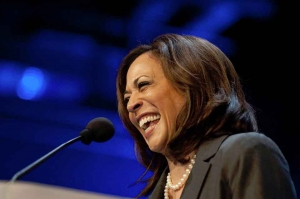 “You know I used to be a prosecutor,” Harris said, flashing a broad smile.

She further described what the settlement will mean for California homeowners and for her ability as Attorney General to crack down on unscrupulous lenders.

“It will require that lenders pay penalties and restitutions to hundreds of thousands of California homeowners,” she said, adding that the deal also “preserves out ability to investigate lender misconduct and prosecute those who committed predatory lending practices…We are doubling down on those prosecutions,” she said.  “I’m immediately expanding our mortgage strike force,” she added, promising aggressive prosecutions.  “It doesn’t end there; we are just starting to lace ‘em up,” the pugnacious prosecutor-turned-Attorney General pledged.

California Democratic Party chairman John Burton praised Harris for wrangling the hefty settlement from “the thieving banks.”  He added, “Without this person, this would not have happened because they were going to cut a back room deal. Kamala  Harris had the guts to stand up and say `We’re not going to do this.’”

Seven of the ten cities hit hardest by foreclosures are in California, or what Harris calls "the scene of the crime."  Shes recalled visiting areas that were “a forest of foreclosure signs.”  Some 1.1 million families in California are underwater on their mortgages, owing more than the homes are worth after real estate values dropped.

The settlement affects homeowners whose loans are owned or serviced by one of the state’s five largest lenders.

For homeowners who are current on their payments but underwater on their loans,  refinancing options will be available.

For homeowners who have fallen behind on payments and underwater on loans—a quarter of a million Californians--options may include reducing the principal of loans or having short sales.

$279 million in restitution to some 140,000 California homeowners foreclosed on between 2008 and December 31, 2011 was also awarded.   (Some, including  Occupy members who staged a protest outside the convention, have objected that this amount is not enough, averaging less than $2,000 per homeowner.  It’s clear, however, that without Harris’ backbone, the total settlement deal would have been far less.)

"The federal Department of Justice and Housing and Urban Development (HUD) were on board and looking to get the settlement done," Nicholas Pacilio in the California Attorney General's office told East County Magazine.  Harris not only held out for more money and prosections, but also demanded--and got--minimum requirements that lenders must meet, or pay hefty penalties.  Only California got the latter concession--not other states, Pacilio said.

Portions of the settlement will also go to relieve 32,000 homeowners of unpaid balances remaining when their homes were foreclosed on. In addition, $1.1 billion is expected to be distributed to homeowners for other forms of assistance and to help communities repair the blight left by waves of foreclosures.

Harris emphasized that many homeowners in California and across the nation were  “victimized by fraud” and that many of those victimized have wound up homeless, living on the streets.  She leveled harsh criticism at predatory lenders.  “They may have placed bets on Wall Street, but we paid the price on Main Street.”

Harris, a career prosecutor, is used to winning tough battles.  After a hard-fought election, she narrowly beat out Republican Steve Cooley to became California’s first female Attorney General and first Attorney General of African-American and Asian-American lineage. She was honored as  a “Woman of Power” by the National Urban League and received the Thurgood Marshall Award from the National Black Prosecutors Association. She has been featured on the Oprah Show and in Newsweek as one of “America’s 20 Most Powerful Women.” In addition, she is a Vice President of the National District Attorney’s Association.

California's Attorney General has also been mentioned as a potential Supreme Court Nominee if President Obama wins reelection in this post on the Supreme Court of the United States blog:  http://www.scotusblog.com/2012/02/the-court-in-a-second-obama-term/