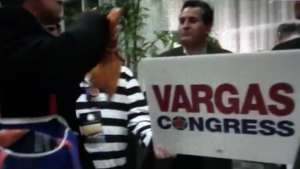 February 16, 2012 (San Diego) – State Senator Juan Vargas came to the California Democratic Convention hoping to find support for his campaign to fill Bob Filner’s seat in Congress.  He won the party endorsement—but has lost support from many here.  A group of activists surprised Vargas in the hall and presented him with a “Spineless Rubber Chicken” award for twice ducking a vote on SB 810, a landmark healthcare reform bill opposed by the insurance industry.

Insurers reportedly spent $1.46 million to elect Vargas to the Legislature. His Congressional campaign has taken another $140,000 in insurance and pharmaceutical contributions, as ECM previously reported http://eastcountymagazine.org/node/8577

SB 810, which failed by just two votes, would have cut insurance industry administrative costs from around 30% down to 5% and used the proceeds to provide health and dental care coverage for every man, woman and child in California.

Vargas’ primary opponent, former Democratic State Senator Denise Moreno Ducheny, has issued a press release blasting Vargas for “walking away from legislation that would provide universal access to health care and dental care coverage.” She slammed Vargas for taking money from the insurance industry, adding pointedly, “Now we can see what this money has bought.” 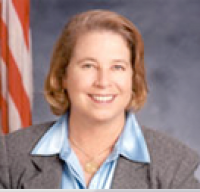 The Congressional district that Ducheny and Vargas seek to win would include the expansive southeast portion of San Diego's East County, as well as portions of the South Bay and Imperial County.  The district is predominently Democratic in registration and political analysts have agreed that the seat will almost certainly remain in Democratic hands.

They were not alone. The Progressive caucus, largest caucus in the California Party, passed out flyers alerting its members to the massive insurance funding backing Vargas--and his vote-dodging, on a bill that would have assured healthcare coverage for the nearly one in five Californians who currently have no health insurance.

Vargas refused to offer an explanation to the activists to explain his failure to vote (twice), despite the fact that single payer healthcare for all—exactly what the bill would have provided –is part of the California Democratic Party platform that all elected Democrats are supposed to support.

The bill would create a single-payer system similar to Medicare for handling insurance billing. It would not, however, create a government-run healthcare system (other than billings) since patients would remain free to choose their own doctors and all privately owned clinics, hospitals or other healthcare facilities would remain so.  The measure’s author has estimated that the bill would save the state $8 billion a year in healthcare costs.

It has faced opposition from the insurance, hospital and pharmaceutical industries, as well as by chambers of commerce representing those industries. The primary arguments against the bill have been potential loss of insurance industry jobs and profits from reducing the allowable administrative/overhead costs.  Some opponents have also issued misleading arguments that distort what the bill does and does not do.

The measure was supported by all but a handful of Democrats and opposed by all Republican members of the State Senate, including East County's Senator Joel Anderson (R-El Cajon).

View a video of the rubber chicken presentation to Vargas  http://youtu.be/uZkZwdfQKh0