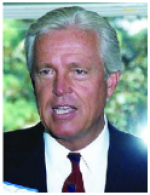 March 19, 2012 (Alpine) – Ronald K. Fuller, prominent Alpine resident, died March 10 at his home in Alpine.   From 1983 until his retirement in 1996, Fuller served as Vice President of Governmental Affairs for San Diego Gas & Electric Company, overseeing legislative and regulatory activities at all levels of government.  From the late 1970s he worked as a lobbyist for the company in Washington D.C.

In addition, he spent time in politics, playing prominent roles in Richard Nixon’s presidential campaign and Ronald Reagan’s campaign for governor. He served as assistant to the director of the Office of Economic Opportunity and as a policy staffer for the White House Domestic Council.

He began his political career by helping Henry Boney win a seat on the San Diego County Board of Supervisors. In later years, he served on the Alpine Fire Protection District board for 15 years, helping to construct a new fire station and put the district on sound financial footing.  Also an avid outdoor enthusiast, he enjoyed fishing and off-road racing in the Baja 1000.

Born in Arizona on January 16, 1938, he has lived in San DIegio County since age three. A graduate of Grossmont High School who also attended San Diego State University, Fuller met his wife, Louise, while working at Thearle’s music store in downtown San Diego.  He is survived by his wife, Louise, three sons (Ron, Ken and Will), daughters Kim and Elizabeth, nine grandchildren, and a great grandchild.

Ron will be missed by many, including those of us who sat with him on the Heartland Communications Facility Authority Commission. A fine gentleman, one who will live in our hearts forever.