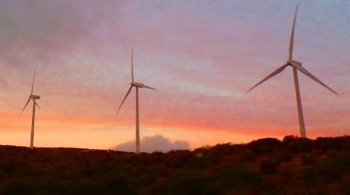 March 30, 2012 (San Diego’s East County)--A real estate appraisal expert who has made a specialty of assessing impacts from nearby wind turbines has announced that he is revising his figures in response to a recent study of over 11,300 transactions near northern New York state turbine arrays.

Mike McCann of McCann Appraisal, LLC spoke at a Boulevard wind energy information meeting last winter and said property owners experience an average 25 percent value loss. At the time, he expected properties up to two miles away to experience value changes in response to turbine construction.

“I wish to refine my distance of forecast adverse value impacts to include at least three miles, should any 3 MW turbines be proposed by any of the developers in East County,” McCann said. “Furthermore, property value guarantees should extend to this greater range to reflect the nuisance and stigma effect of more powerful turbines on marketing of homes.”

The current study, released in July of 2011 by the Economic Financial Studies School of Business at Clarkson University, cites losses of up to 40 percent on properties located within 0.10 miles of new wind turbine facilities. This has prompted him to revise his loss figure upward to a maximum of 40 percent and expected adverse impacts out to three miles, with effects becoming less extreme with distance.

“The Clarkson study clearly shows value impacts out to three miles … and clearly shows the closer the turbine, the greater the impact,” McCann said.

A Department of Energy-funded study originally released in 2009 by Lawrence Berkeley National Laboratory, often cited by wind proponents, says property value impacts are negligible and that effect of what is known as “wind farm anticipation stigma” goes away after the turbines are built. The Berkeley results are divided into sale values for pre-announcement, post-announcement and post-construction time periods. The study may be flawed, however, as it leaves out some of the very properties that might provide the most telling results, McCann said.

In the study footnotes, Berkeley authors specified that land without homes, properties of over 25 acres, homes where the sale price was thought to deviate too far from the norm and 34 repeat sales were excluded from the study.

A co-author of the study, SDSU Economic Department Chairman Mark Thayer, defended the exclusions as appropriate from a statistical standpoint and said he feels the Clarkson study supports the Berkeley conclusion that negative value impacts go away after the projects are built.

The Clarkson study is based mainly on pre-construction figures, Thayer said: “There is no impact. Property values do not go down near turbines.”

However, real estate appraisers, which are closely regulated by the federal government, base their calculations on “comps,” or nearby sales of comparative properties. A licensed appraiser would not have the luxury of leaving out the properties omitted by Berkeley, McCann said, so the older study does not offer a realistic assessment of the value loss that would be suffered by neighbors of turbine arrays. Statistically appropriate or not, those sales would not be excluded from an appraisal.

“The fallacy of the Berkeley study is the assumption that value impacts must somehow be statistically significant against a data background of sales located 5 to 10 miles from turbines,” McCann said. “Had they focused on the 1/10th-mile to 3-mile range, I expect their findings would be significant to the homeowners who are losing 15 to 40 percent of their home equity and value.”

Neither of the studies consider time-on-market, McCann said, adding, “And what about the homes that don’t sell at all?” The latter do not show up on studies because there are no transaction records for them.

The size of the turbines being built is also a factor in McCann’s announcement, as almost all the data available is on older installations that contain smaller turbines. Increasingly, 3-megawatt machines are appearing on the landscape with concomitant increases in visibility and sound pressure. Sound is a “disamenity” often mentioned by wind farm neighbors, some of whom have abandoned their homes altogether because of the constant noise.

McCann is a proponent for property value guarantees in communities that are heavily impacted by wind turbine projects. Both the Boulevard and Jacumba planning groups have asked for property value guarantees as a condition for permitting large projects, as well as evidence-supported setbacks and protections in the noise ordinance to include low frequency and sub-audible effects. Both wind developers and the county have, so far, resisted addressing either.

Among the numerous energy projects proposed for the Boulevard area is Tule Wind, an up-to 137-turbine project slated to be built along McCain Valley Road by Iberdrola Renewables. The turbines will range in size from 2MW to 2.5MW.

Asked why, if they are so confident of no impacts, wind developers wouldn’t offer value guarantees, Tule Wind project manager Jeffrey Durocher said the terms of some proposed guarantee programs are just too subjective.

Some proposals “… give the homeowner leeway to claim that any value loss is attributable to the presence of turbines, despite the possible effects of other factors,” Durocher said.

“It’s very difficult to get agreement among the various parties on what causes the value loss. To do that for a number of homes for an unspecified distance is pretty unmanageable,” Durocher said.

In a powerpoint presentation after the LBNL report was published, Ben Hoen another co-author of the LBNL property value study, states that the LBNL study "does not mean that industrial wind turbines can not have an adverse effect on property values". In the middle of the slide it has a large "NO" to get this point across.
By the way the LBNL report was from the DOE but no one seems to ever mention that it was funded through the Energy Efficiency and Renewable Energy (wind and hydro power)wing of the DOE,on top of that LBNL and the lead author Ryan Wiser have been given many awards from the industrial wind lobbying groups for advocating for the wind industry.

Four hundred turbines!? Over how wide an area, do you know Miriam? Isn't this approximately twice the number proposed for Ocotillo?

Public wealth group is a company that can help you in this and many more when it comes to property investment.

The real number is 137. Sorry for the error, which we have corrected.