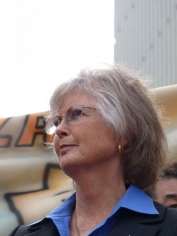 SAN DIEGO— San Diego County Supervisor Dianne Jacob is set to ask state regulators to reject a proposal by SDG&E that would force ratepayers to shoulder the costs of the 2007 wildfires and future wildfires. The California Public Utilities Commission is holding public hearings on the matter tomorrow at the Al Bahr Shriners Memorial Auditorium, 5440 Kearny Mesa Road, at 2 p.m. and 6 p.m.

The Supervisor, who represents communities hardest hit by the devastating 2007 wildfires, says the controversial cost shift would give SDG&E little incentive to maintain its electric grid. A report conducted by the Consumer Protection and Safety Division of the CPUC determined that SDG&E violated CPUC safety rules and was responsible for the Guejito, Witch and Rice fires.

“SDG&E’s plan to stick ratepayers with the bill  for future fires is bad public policy because it effectively gives SDG&E a free pass to ignore its infrastructure, which is exactly what the utility did before the 2007 wildfires,” Jacob said. In a February 2011 letter to the CPUC, Jacob asked that the plan be given a public airing in San Diego instead of San Francisco where the CPUC is based. She has since praised the Commission for its decision to travel to San Diego.

“No one understands more intimately than San Diegans the consequences of a utility ignoring its maintenance obligations,” Jacob said.

At the same time, Supervisor Jacob warned that individuals speaking favorably of SDG&E at the public hearing may not be doing so voluntarily.

“I’ve witnessed representatives from non-profit organizations and other special interest groups travel many miles to speak glowingly of the utility. Without exception, these groups had strong financial connections to SDG&E and were, I believe, prodded and scripted by the utility to attend and make comments.

Jacob urged the public to be alert to the potential for phony testimony at Thursday’s hearing. She said these groups should voluntarily disclose any financial contributions from SDG&E.

SDG&E has contended that ratepayers, not its shareholders, should pay for its uninsured liability costs for the wildfires that were caused by its lines.