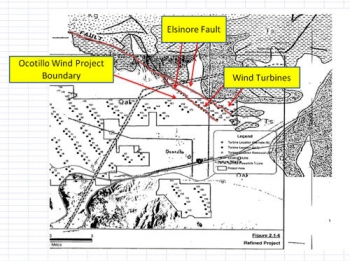 By Mia Myklebust
April 10, 2012 (Ocotillo)—At least three appeals have been filed over the Imperial County Planning Group’s approval of the Ocotillo Express wind project.  The appeals seek to have the Imperial Valley Board of Supervisors review the decision.
Appeals filed by yesterday’s deadline include the Viejas Band of Kumeyaay Indians, California Environmental Law Project, and Boulevard Planning Group Chair Donna Tisdale.
Robert Scheid, media relations spokesman for Viejas, said that so far, complaints about the project have not been taken seriously, but he is hopeful 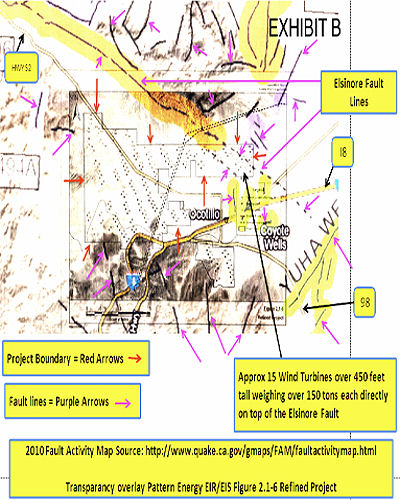 that filing a formal appeal will result in greater consideration for the tribe’s concerns. Scheid added that the Planning Commission didn’t seem to give even a nod of recognition to the neighbor's or tribal concerns.
“Hopefully the county board of supervisors will give this more consideration than Pattern Energy, BLM [Bureau of Land Management] and the planningcommittee gave it,” said Scheid. Viejas has previously voiced concerns over impacts on cultural resources including sacred sites, geoglyphs and artifacts.
The California Environmental Law Project cites a number of specific problems with the project. The group’s official appeal states that the proposed wind project is not permissible with zoning and not consistent with Imperial County’s General Plan, including open space requirements. The group also contends that a height variance granted is invalid and that the proposed project failed to adequately address noise concerns in addition to failing to consider reasonable alternatives, such as distributed solar generation. The group also called for the preparation of a supplemental Environmental Impact Report due to new information released on Bighorn Sheep and Swainson’s Hawk in the area.
In addition, the appeal raised serious questions over seismic safety.  The group’s lawyer, Lisa Belenky, said, “All the assurances about the location of the project in relation to the Elsinore fault are substantially inaccurate and potential impacts discussions need to be altered accordingly. See FEIS Figure 2.1-6. The FEIR at §4.11-40 states that the `applicant shall not locate project facilities on or immediately adjacent to a fault trace.’  As shown in Exhibits A and B, many of the project wind turbines are located near or on faults.”
Pattern Energy has flatly refused to discuss seismic issues and public safety concerns with ECM.

The Imperial County Board of Supervisors has scheduled a hearing on the appeals for Tuesday, April 24 at 10:45 a.m. at the County Administration Building, 2nd floor.

Every shred of sound reasoning militates against the idea of Wind Farms. They are a terribly inefficient and expensive power source, destroy tens of thousands of acres of pristine wilderness, and do untold damage to the delicate flora and fauna. Take just one example: Every year seventy golden eagles are killed by the turbines at the Altamont pass in central California--and that's just the eagles. Another 2,400 raptors, including hawks, owls, kestrels and 7,500 birds of other species meet the same fate. Almost all of these animals are protected by the Migratory Bird Treaty Act, the violation of which can result (to people like you and me) in a $250,000.00 fine or two years in jail. But not (surprise, surprise...) the wind farm industry, which has never been prosecuted for their unpermitted carnage.

Wind farms satisfy no need beyond the "progressive" vanity and greed of their crony capitalist backers. Here in our beautiful backcountry, there is far too much to lose. They must be stopped.

The project has a radar plan to protect the eagles from being killed by the turbines. But it will not work for the eagles or any other species. If you read through the mountain documents, the developer evens states this radar is a test of sorts. If anyone is paying attention, there is no radar at Altamont to save the 60-75 eagles killed each year. Nor is there any radar at most other wind farms in America. This is because IT DOES NOT WORK. But radar does work to sell a project in highly sensitive areas to the ignorant. The noise produced by these turbines will also have a negative impact on the bighorn sheep. Based on their discussion of "Predicted noise levels" it should be easy to stop this project and have all this properly disclosed.