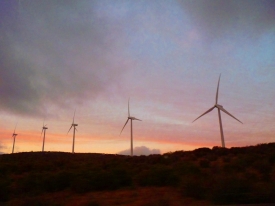 April 23, 2012 (San Diego’s East County)--Members of the Manzanita tribe who live on the reservation are being subjected to levels of transient voltage a thousand times higher than normal, due to the presence of neighboring Campo reservation’s wind turbines, according to public health epidemiologist and physician Dr. Samuel Milham.

Milham later submitted written comments for an April 13 planning commission hearing of San Diego County’s proposed wind ordinance that included graphs of the stray voltage he measured at the reservation with a strong recommendation about setbacks:

“My recommendation is that wind turbines should not be sited within 3/4 of a mile of homes, and that it would be prudent to delay wind farm construction until the utilities and the manufacturers can solve their electrical pollution problems,” Milham wrote.

High frequency voltage transients, dubbed less formally as “dirty electricity” and “stray voltage,” are brief changes in voltage or current that occur over a short period of time – about 1/16 of a voltage cycle, according to surge suppression system company Stedi-Power. Voltage transients normally last only about 50 microseconds and current transients last typically 20 microseconds.

According to Milham, power, as it is delivered today, produces enough dirty electricity to increase the risk of cancer, diabetes, heart disease, leukemia and attention deficit disorder. These 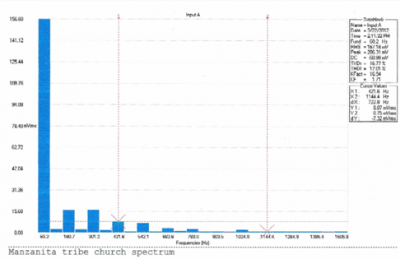 are risks to which most of the population is subjected, especially people who regularly work near electrical machinery, office devices, cell towers and smart meters, but near wind turbines, it’s “a thousand times higher,” Milham said.

Dirty electricity impacts extend about ¾ mile from turbine arrays, but also tends to travel erratically through ground and interconnected waters on the ground and under it, making it difficult to predict how far, or where, it might travel, Milham said: “If you’re on a grid, it can travel for miles.”

The Manzanita reservation is a mere ½ mile wide, making it impossible for residents to get outside the sphere of influence of the Campo turbines. Now other wind projects proposed, including Tule Wind and Shu'luuk Wind, could exacerbate health problems for tribal members and other area residents.

“The tribal office is really hot and dirty,” Milham said, adding that ground and air readings on the whole reservation are consistent with high readings near other turbine arrays. Readings indoors, including a church and tribal hall, also measured high.

It is possible to tame stray voltage, using a variety of relatively affordable solutions, including frequency converters and surge suppressors, which also protect electronic devices from the same electrical spikes.

According to a 2008 study by Trent University and published in “Science of The Total Environment,” teacher health and student behavior both improved when such devices were installed in three Minnesota schools: “Headaches, general weakness, dry eyes/mouth, facial flushing, asthma, skin irritations (and) overall mood including depression and anxiety improved significantly among staff,” the study said.

However, while conditioning and suppressing is useful inside buildings, areas of influence by turbines is harder to tame, Milham said: “People on the reservation can’t protect themselves, even with filters, because it’s everywhere outside.”

“Items such as CFL bulbs, cell phone transmission antennas, power supplies for portable computers, cell phone chargers, dimmer switches, variable speed fans and many other electronic devices that require a transformer to convert the voltage will “dirty” the electricity that enters your home,” according to Associate Professor Dr. Magda Havas, an Associate Professor of Environmental and Resource Studies at Trent University.

Dirty electricity has become a subject of increasing debate, as emerging studies link it to a variety of modern ills, but just as many have been put forth to contradict those findings. For instance, a 2010 article in “Journal of Exposure Science and Environmental Epidemiology” said a collection of seven such studies were based on flawed methodology.

Manzanita tribal consultant Jeff Riolo said the tribe is not prepared to comment on issues related to the turbines.

However, Riolo spoke at a recent Imperial Valley Planning Group meeting, opposing the Ocotillo Express wind project, made these comments in the public record.

“We have suffered,” he said. “Our children have higher attention deficit disorder rates.” He also cited sleep disorders, cancer and other conditions some believe are related to living in the shadow of wind turbines.